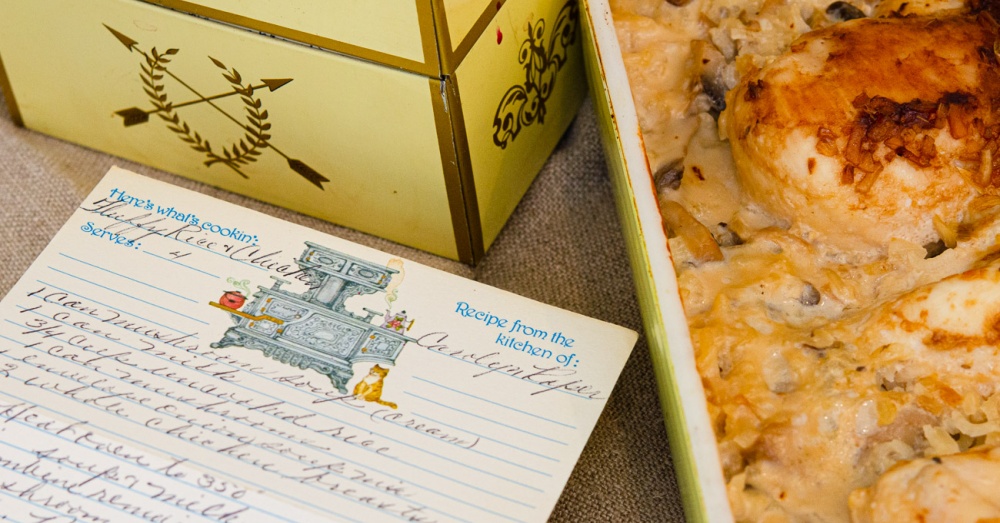 With the Recipe Tin Project, you win some and you lose some. That’s just the way it goes with vintage recipes – sometimes there is Jellied Chicken Jumbo and then sometimes there’s a winner like this Fluffy Chicken and Rice. It’s the type of retro recipe that has serious staying power. Featuring chicken and rice (that does indeed turn out fluffy) that all bakes together in the same dish, it’s the kind of one-pan wonder that makes dinner both easy and tasty.

The Recipe Tin Project (predictably) is a project where I cook my way through the recipe cards in an old recipe tin. It’s chock full of old recipe cards, most of which seem to be from the ’60s and ’70s. I love food history, and the idea is to breathe new life into these recipes from the past and maybe learn a technique or two from them along the way.

Some of the cards are basic index cards while others are more detailed. This one is more of the latter, with a sweet stove and cat illustration at the top. The handwriting is even and neat and the card isn’t as worn or as stained as some of the others in the tin. This one also has fairly robust directions – some cards have had none at all!

This takes just six ingredients and the end result is moist, fluffy rice and flavorful chicken. It reminds me a lot of our existing No Peek Chicken and No Peek Pork Chops recipes, which both use the same method of a long baking time and lots of liquid to achieve a similar goal of fluffy rice and protein with almost no effort from the cook at all. This version adds in some onion soup mix and canned mushrooms for some extra flavor and I think that was a very good plan. You end up with some seriously delicious rice with a mild onion and chicken flavor and it’s so easy to make. Winner, winner, chicken dinner!