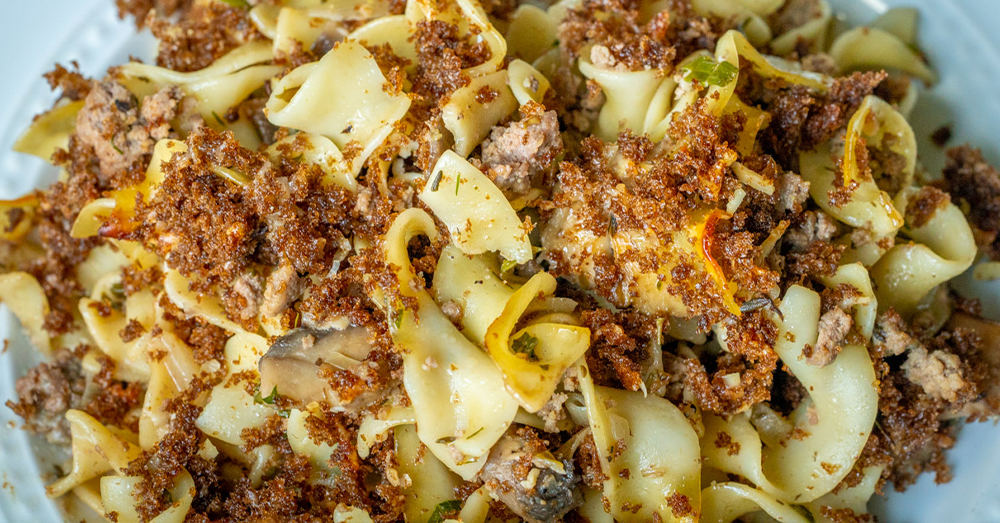 Classic comfort food from the queen of quick meals.

Rachael Ray is the queen of quick and efficient meals, but she also manages to make them incredibly tasty. Case in point – her Beef Stroganoff Casserole. Her recipe takes a classic comfort food dish and does it one better by transforming it into casserole while staying true to all the components that make it so good in the first place. Full of tender egg noodles, savory beef and mushrooms in an herbed sour cream sauce, and the genius addition of rye breadcrumbs, it’s a casserole that tastes familiar and totally new all at once.

This has everything you know and love about beef stroganoff plus the comfort of a baked casserole. In short, there’s even more to love about it. The base is ground beef and mushrooms that are sauteed with garlic, shallots, and a little sherry before they meet some heavy cream and sour cream and get tossed together with egg noodles and a bounty of fresh herbs. It’s not quite as creamy as a skillet stroganoff, but it hits all the right notes. (And some extra ones.)

My favorite addition here is the breadcrumbs. You can use rye or pumpernickel bread to make them – either impart great flavor – and then you toss them with melted butter and shredded gruyere. That mixture forms a crispy golden blanket over the top of the casserole and while it’s not a flavor that generally accompanies a stroganoff, it tastes as if it was always meant to be there.

Rachael’s original recipe doesn’t include baking times or instructions for making breadcrumbs so we’ve added those in to make the process a little clearer. Even without those additions, it’s a simple casserole to make, and one where an extra minute here or an extra pinch of something there doesn’t negatively affect the final outcome.