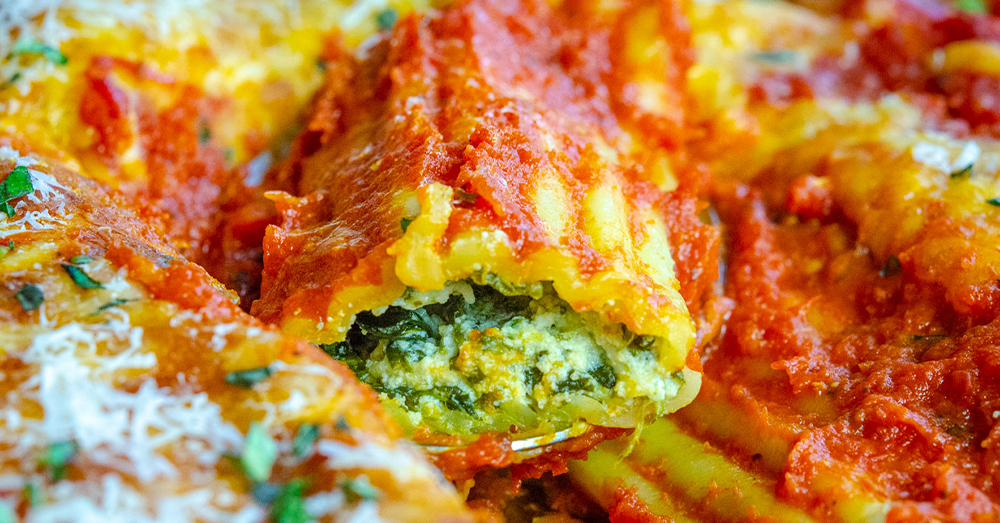 The oven does all of the work for you!

I love manicotti but I have long avoided making it because I’d always assumed (perhaps naively) that you always had to go through the trouble of boiling the noodles, waiting until they were cool enough to stuff them, and that it was a whole big ordeal. But it turns out that is not the case! You can make excellent manicotti without boiling a single noodle, it’s true. You can stuff dry noodles and bake them in saucier surroundings so they get nice and tender all on their own in the oven, and that means you get delicious manicotti that’s easy enough to make on any given weeknight. Win-win!

Maybe you have known this was possible all along, but to me, No Boil Manicotti feels like a revelation. It’s just SO easy to make but it still feels like a special occasion dish, and that’s always a great combination. I’m using a pretty traditional ricotta and spinach filling here but you could definitely play around with filling ingredients and even the type of sauce you use – as long as you have enough liquid in the baking pan, it will get those manicotti tender.

But all you’re doing is stirring together some ricotta, eggs, spinach, mozzarella, and seasonings and piping it into the dry tubes of pasta. This isn’t an instance where you need a piping bag – a ziptop bag with the corner cut off works absolutely fine! You’ll lay down the filled pasta on top of some marinara and then surround it with more… about five cups will do it. That seems like a lot, but it’s the extra liquid that “boils” the manicotti for you.

A blanket of cheese tops it all off towards the end of the baking time and before you know it you’re ready to dig in.

This is one of those dinners where the oven does most of the work for you – it’s seriously just about ten minutes of prep work if you’re using jarred marinara. And it’s not just that it’s easy, it’s also a dish that the whole family truly loves and that’s a combo we’re all always looking for, isn’t it?

Recipe adapted from From Valerie's Kitchen.