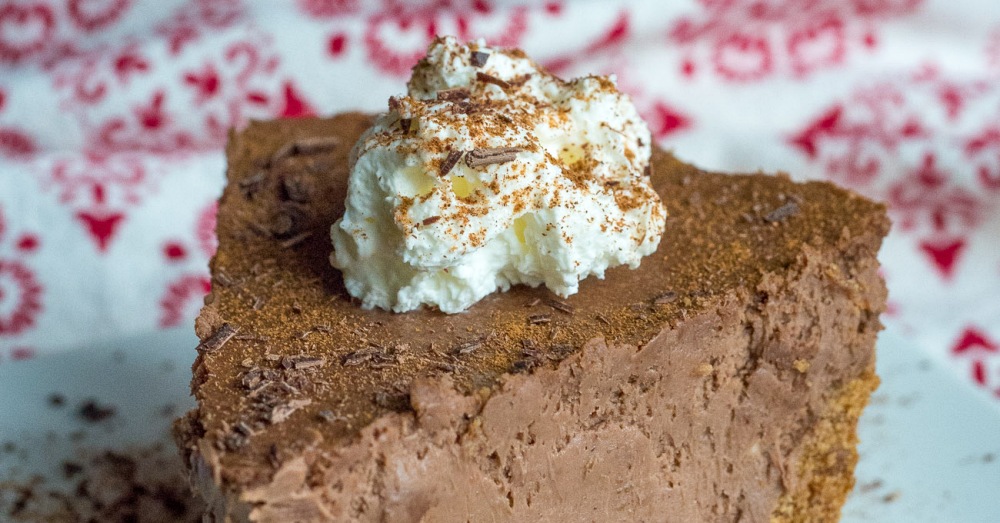 The balance of flavors in this dessert is incredible.

Cheesecake is one of those desserts that is so popular because it’s not over-the-top sugary sweet. But, we also love it when cheesecake is served with some unexpected flavors. So, when we came across this recipe for Mexican chocolate cheesecake we knew we had to give it a try. The texture is creamy, rich, chocolatey, and gets a wonderful hit of cinnamon from the crust. It’s a real stand out winner at our house.

The crust for this cheesecake is made from cinnamon graham crackers, butter, and a little extra cinnamon for good measure. This creates a wonderful crust with a lot more flavor than you usually find in a cheesecake recipe.

Once the crust is pressed into the pan it goes into a 350˚F oven for 8-10 minutes. While that’s baking you can start on the filling. First you melt the chocolate in cream over low heat in a saucepan.

Then in a mixing bowl combine the cream cheese, sugar, chili powder, cinnamon, and vanilla until fluffy. Next add the eggs one at a time and combine well. Then add in the chocolate cream and stir.

Pour the filling into the crust and then bake for 1 hour. The center should still be a little jiggly at this point. Then turn the oven off and place a wooden spoon in the door to allow the cheesecake to slowly cool off for another 30 minutes.

Once the cheesecake has been allowed to slowly cool a bit the next step is to refrigerate the entire thing for at least 4 hours (or overnight). The reason for this is that the filling contains whipped cream which lends a lovely and light texture to the cheesecake. However, it does need some time to firm up in the fridge.

This cheesecake is wonderful topped with whipped cream and sprinkled with cinnamon. But, of course it’s so good that you can serve it without all the bells and whistles and it will still be a smash hit at the dinner table.

We love that this recipe brings new flavors -including just a pinch of chili- to a classic style cheesecake. It truly is a satisfying dessert that any cinnamon lovers should try.