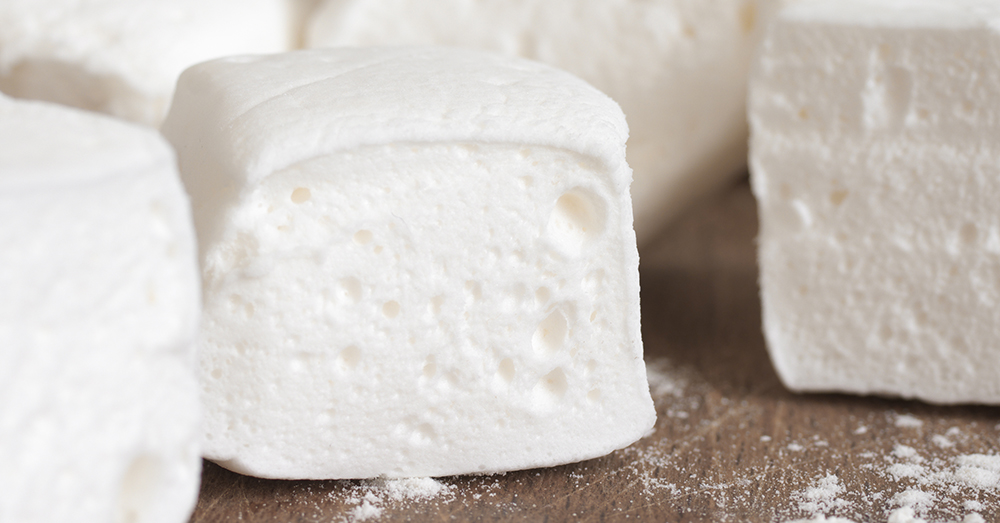 Maybe you’ve only ever thought of marshmallows as little things that you fish out of a bag you have stashed in the back of your cupboard when you’re craving a cup of hot cocoa, but they’re so much more than that! When you make marshmallows on your own, when they’re not from a bag that – let’s admit it – has gone a little stale, they can be soft pillowy clouds of sweetness that you’ll delight in eating all by themselves. They don’t need to be a topping or an addition to some baked good, they’re incredible just as they are. And they’re surprisingly easy to make.

They rely on gelatin and egg whites for their texture but don’t let either of those things scare you off. You’ll start by softening some unflavored gelatin in some water and setting it aside while you whip up some egg whites into stiff peaks. The gelatin then goes into a mixture of sugar and water that you’ll heat on the stovetop to 248°F. You’ll pour that hot mixture into the egg whites as you mix, drizzling it down the sides of the bowl so it doesn’t cook the egg whites. (No scrambled eggs here.)

You’ll flavor it all with vanilla and after five minutes of mixing, you’ll have an airy, pillowy cloud of goodness. Spread that into a sheet pan dusted with a mixture of powdered sugar and cornstarch and let it all sit until you can slice it up and do one of three things – eat it right out of the pan, top off a mug of hot cocoa or coffee, or make the best s’more of your life. But why not live a little and just do all three!