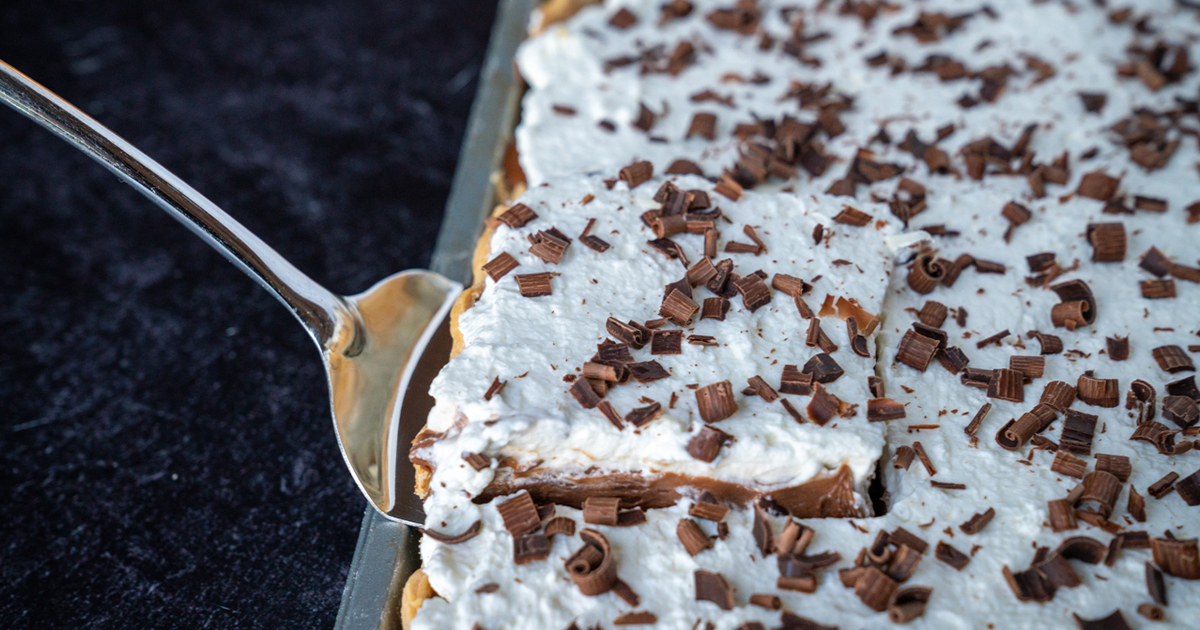 A classic pie built for a crowd.

I have seen people eat all of the filling out of a slice of pie and leave the crust behind. But that is not me. When it comes to pie, I want as much crust as I can get, which is why I love slab pie so much! Because the pie is so much bigger and the filling is so much thinner, the ratio of crust to filling is ideal. (Or at least I certainly think so.) And a French Silk Pie illustrates that point perfectly… While the filling of a normal French Silk Pie can feel like a bit much, with a slab pie, it’s the perfect dose of rich chocolatey flavor backed by crispy crust. And it feeds a crowd, which is always a plus. (Whether you actually have a crowd or just want more slices for yourself.)

Here’s a nice thing — you can use your favorite pastry recipe OR storebought crust for this; it’s totally up to you. But whatever route you’ll go, you’ll need the equivalent of two crusts. If you’re using storebought, just stack the crusts together and roll them out into a rectangle that’s slightly larger than your baking sheet. (Which should be a half sheet pan, which is about 13×18 inches.)

Trim and crimp as needed, then line it with parchment paper and some pie weights or dried beans and blind bake it until it’s just lightly golden.

Then it’s time for the filling, which is actually pretty simple. You need: butter, sugar, eggs, vanilla, heavy cream, and some bittersweet chocolate.

First, you’re going to melt the chocolate. And good news, you can use your microwave! No double boilers needed.

Just nuke it in 30-second intervals, stirring it in between, until it’s nice and smoothy and melty.

Then you do have to use your stovetop. But it’s a simple affair, and really no big deal. Whisk together some sugar and eggs and cook until the mixture is thick enough to coat the back of a spoon…

… Then pull it off the heat and stir in the melted chocolate and vanilla.

And then you fill. Yum.

The final flourish is some whipped cream and chocolate shavings because a little extra chocolate never hurts anything.

This is a decadent, indulgent pie and it makes enough to feed a ton of people. Those are great attributes, for sure, but what I love most is the ratio of crispy crust to silky chocolate filling here — it’s a dream!

Recipe adapted from Cooking For Keeps.