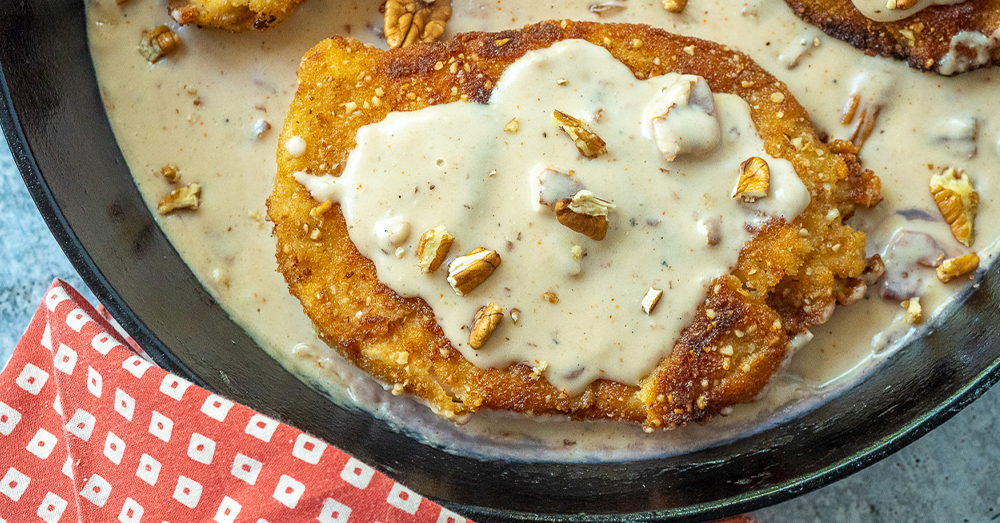 A showstopper of a chicken dinner.

I feel like a lot of the time, I get on here and try to sell a recipe to you. It’s really quick to make! You only have to wash one dish! You only need five ingredients! But for this one, I think all I need to do is tell you the name: Crispy. Bourbon. Pecan. Chicken. Skillet. I mean, you had me at crispy. Or maybe at bourbon pecan. And altogether it’s almost too much deliciousness to behold.

Are you ready for a showstopper of a chicken dinner? Buckle up.

First off, the chicken. You can use boneless skinless breasts or tenders, but if you go with the former, trim them of fat and pound them out to a nice even thickness. Then, brush both sides with a mixture of honey and Dijon mustard. (You don’t want all the flavor in the coating, do you?)

Dredge the honey-Dijon coated chicken in flour and then dip it in an egg wash. The purpose of this is to get the coating to really stick and trust me, you want as much of it on there as you can manage.

See, it’s a delicious mixture of both pecans and breadcrumbs so it’s not just crunchy, it’s also flavorful and nutty.

Coat the chicken in that mixture and then get it into a hot skillet with just enough oil to coat the bottom.

But don’t go TOO hot. The pecans will brown up faster than the breadcrumbs, so take care not to burn them. The chicken takes about five minutes per side and then it’s time to work on the sauce! (That might be the best part.)

If your skillet has collected too many blackened bits, you should go ahead and wipe it out as you don’t want them muddying up your sauce. After that, it’s just a matter of melting down some butter, whisking in some flour, and then adding all the deliciousness, like bourbon, heavy cream, a touch of cayenne, and more chopped pecans.

Once that’s come together, the chicken hops back in to cook through and take on some of that creamy-bourbony-buttery flavor.

It’s every bit as good as it sounds. With crisp but juicy chicken nestled in a creamy sauce that’s studded with pecans and kissed by bourbon, it just might be heaven in a skillet.

For the flour mixture:

For the egg wash:

For the breadcrumb mixture: