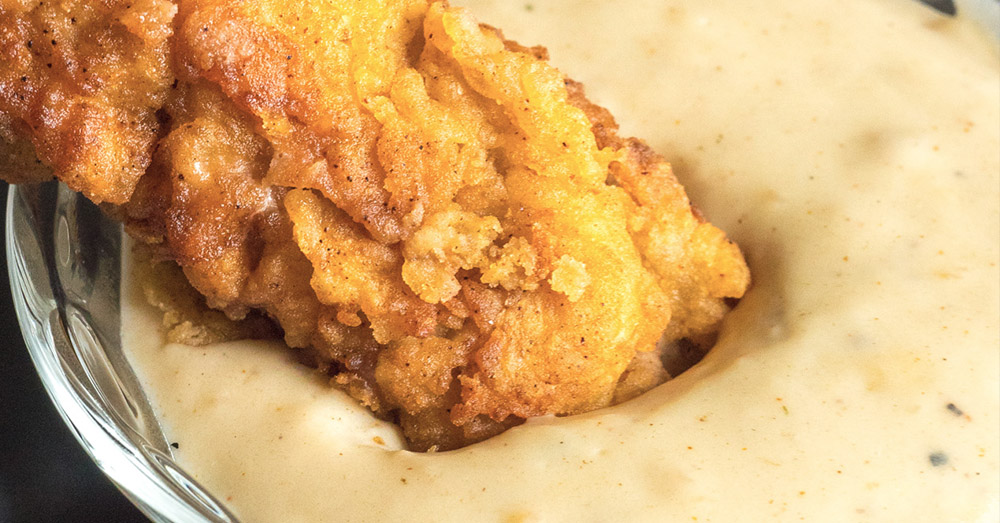 Chicken strips and chicken nuggets are the more casual cousin of crispy fried chicken, so why on earth doesn’t chicken-fried steak have the same kind of dippable counterpart? It’s a question that needs answers. So we decided to go ahead and solve that problem with these delicious dippable Chicken-Fried Steak Fingers. Served with a quick and savory country gravy, they work for lunch or dinner but also any of the times a full chicken fried steak might not, like as a party appetizer, for starters.

To get these crispy, hearty little beauties, you’re going to start with tenderized cube steak that you slice into strips. You dredge those strips in seasoned flour, dip them in eggs, and then back in the flour just to make sure you’re going to get a nice and thick crispy coating.

And then they fry. This is pan-frying, so you’re not dealing with a large pot of oil and they’re much quicker to cook than a chicken thigh or a full steak. About two minutes per side and you’re ready to make the gravy!

And that’s really what this is all about, isn’t it? The combination of meaty steak, a crispy coating, and a creamy but savory gravy. You’ll want to wipe out your pan before starting, just to make sure any overly-browned bits don’t go into flavoring your gravy. But then it’s just a bit of butter and flour, some milk, and plenty of salt and pepper and you’re ready to dip.

The gravy still takes on that meaty flavor from the pan-frying but it’s a creamy contrast to the crispy steak. This is hearty, stick-to-your-ribs fare for sure but in finger food form!