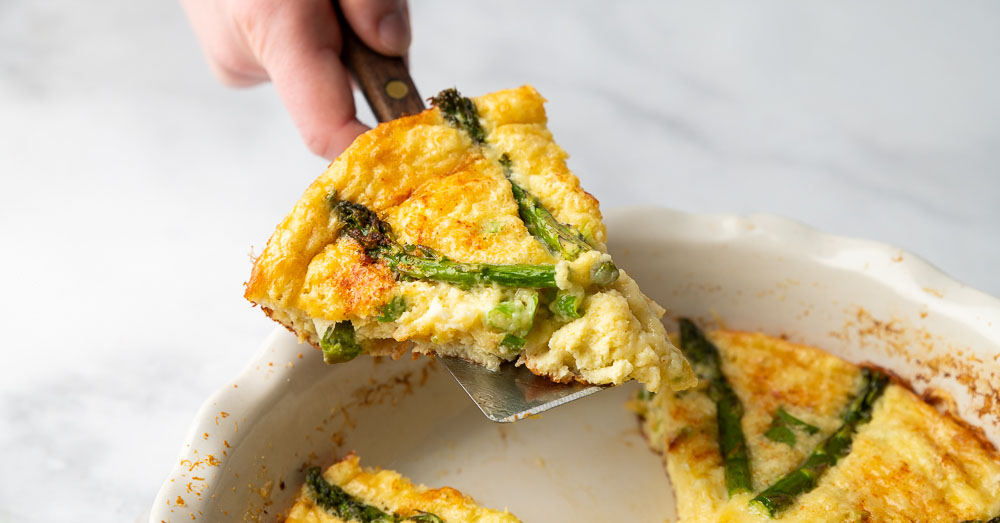 As a kid, most of the times I ever ate asparagus it was steamed with a bit of butter on top. But, as an adult I now know that asparagus can be made a lot of different ways. And, instead of diluting the flavor of these stalk-y vegetables, pairing them with savory proteins and spices can bring out the best in them. For this asparagus pie, there’s no traditional crust, but there is a ton of flavor in this easy recipe.

To make a sort fo flour-free crust grease your pie pan with butter, then sprinkle some parmesan cheese. Then a mixture of Gruyère cheese, asparagus, and green onion goes on top of the cheese “crust”.

Then the filling of the pie is a very quiche-like mixture of flour, eggs, spices, half and half, and dijon mustard. After you carefully pour this on top of the asparagus then comes the fun part of making a design on top of the pie. I love that the topping signals what’s inside- so quaint and yet festive somehow.

It’s a wonderful display of asparagus, a plant that’s been eaten in Europe since at least the Roman times. And, dijon goes well with this veggie as in dijon Hollandaise (called Sauce Dijon) served over steamed asparagus in French cooking.

Once this is out of the oven you’re left with a hearty pie akin to a quiche, but loaded with cheesy flavor and the unique taste of fresh asparagus. And, this is a great recipe for a Meatless Monday, too!