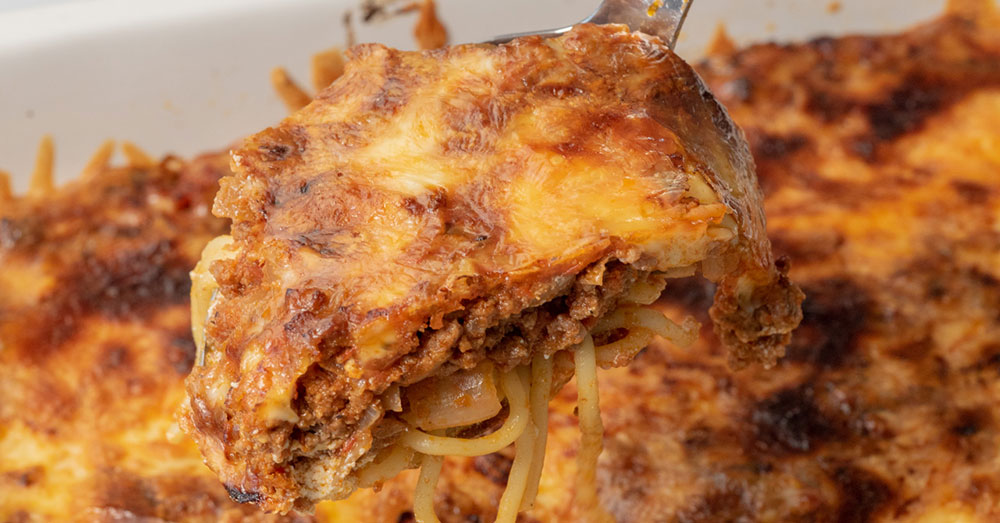 All the glory of Spaghetti Pie, in scoopable casserole form.

Spaghetti Pie, if you haven’t had the pleasure, is a layered, sliceable situation that combines so many great things like pasta, cheese, meat, and marinara. It’s a home run. This Spaghetti Pie Casserole is also a home run because it combines all of those great things but in a way that’s much easier on the cook. It’s everything you know and love about Spaghetti Pie but in scoopable, casserole form.

Here’s how you go about making it:

While your spaghetti is boiling away, you’ll brown some ground beef with onion and garlic before pouring some marinara in to simmer for a few minutes. When both the pasta and the sauce are done, you’ll start layering your components. First up is the pasta, and next up is the layer that makes this a little more special than your average spaghetti night – a mixture of cream cheese and sour cream.

On top of that creamy goodness, you’ll layer the meat sauce, followed by a blanket of mozzarella (which gets beautifully ooey-gooey in the oven). Resist the temptation to stir! You want everything to have its own layer so that when you dig into this you get melty mozzarella, zesty meat sauce, creaminess, and chewy spaghetti in every bite.