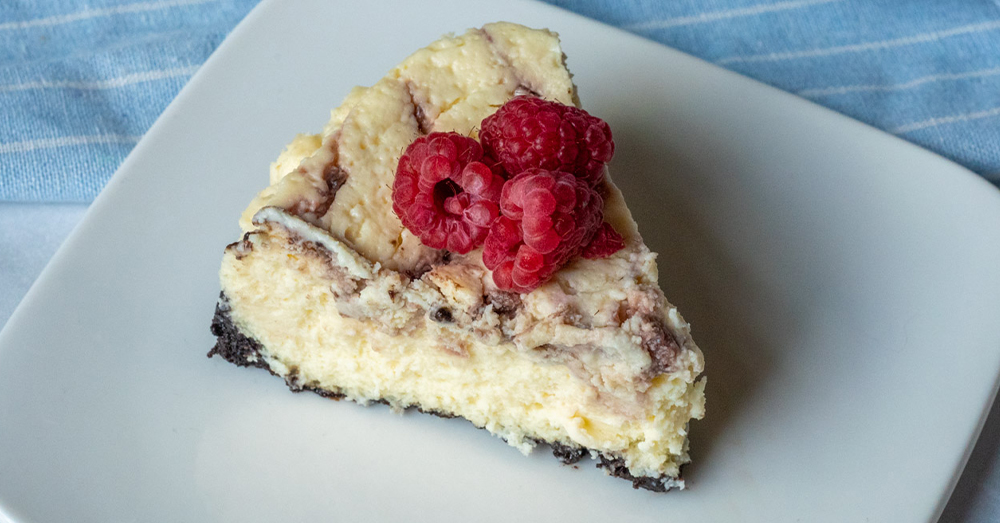 It turns out so incredibly creamy.

Cheesecake is probably my favorite dessert of all time. There’s something about that creamy texture that us just so satisfying. And, because it’s a rather rich treat it’s much more enjoyable to savor it slowly. Add chocolate and raspberry to it and it’s even better. But, the trick with this cake is that you can make it in the slow cooker, freeing up your oven for the other dishes.

As anyone who’s made cheesecake can tell you the only downside is that the process hogs the oven for a really long time. Not only does a cheesecake need a long time to bake, but then it has to cool down in the oven for a while to avoid cracking along the top.

Because of the time needed it can be really difficult to make the day’s meals and a cheesecake as well. Using the slow cooker eliminates this problem and results in a really moist texture because of the steam that’s created in the closed pot.

To start making this recipe you put an entire package of Oreos in the blender along with some butter. Pulse until it looks sandy and then press this into a springform pan lined with parchment paper. For some cheesecakes you wouldn’t need this much insurance, but the slow cooker is such a steamy environment that the parchment and the release pan really come in handy. They ensure that you can actually get the whole cheesecake out at one time.

Pour the crust into the pan and then press it down and along the sides somewhat using a glass or your hands to make it level.

For the filling this recipe uses yogurt instead of sour cream, but either will work in this instance. Combine the softened cream cheese with the yogurt, sugar, and vanilla and then pour into the pan. The next bit is the fun part since you spoon dollops of seedless raspberry preserves or jam onto the cheesecake. Then take a knife, a fork, or a skewer and drag it through the jam, creating swirls on the top of the cheesecake.

Place a steamer tray into the bottom of your Crockpot and fill with hot water just an inch or so. This is so that the cheesecake never gets boiled since it’s elevated from the water. If you don’t have a tray you can use 3 equally-sized balls of crumpled foil to balance the pan on.

Then set the slow cooker to high and let is cook for 1 1/2 to 2 hours. Make sure to put a towel around the lid to lock in more moisture during the cooking.

Then turn the slow cooker off and let the cheesecake cool down for an hour. After that allow the cheesecake to cool completely before removing from the pan. Once it’s no longer warm pop it into the refrigerator. Depending on the type of jam you use it can lose some color in the cooking or turn slightly brownish. This is normal and doesn’t affect the taste at all.

Garnish with fresh raspberries or a drizzle of melted chocolate for a really wonderful dessert that doesn’t even require an oven to make.