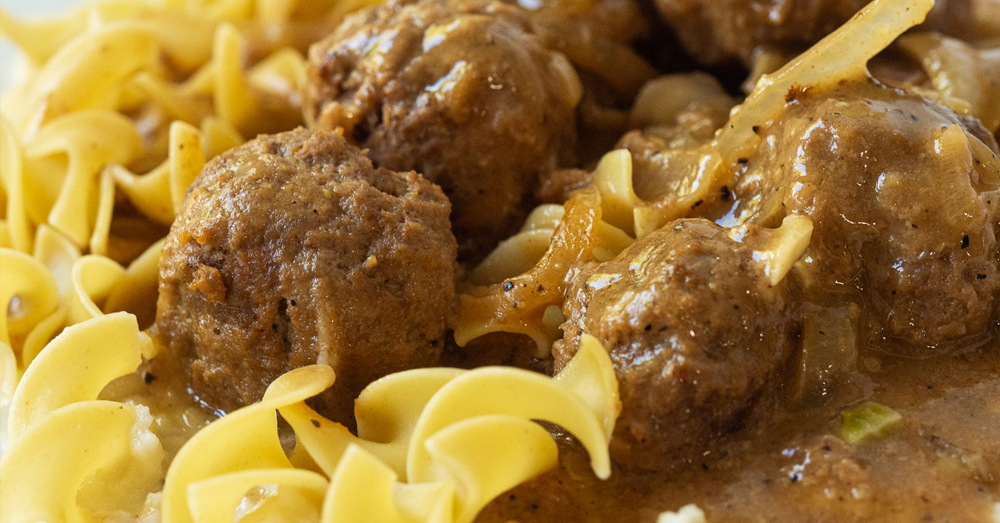 How long has Salisbury Steak been around? Twenty years? Fifty? Turns out, it’s more like a hundred-and-twenty years, and if something has that kind of staying power then you know it’s for good reason. While there’s nothing wrong with the original Salisbury Steak (nothing at all!), this recipe adds the fun twist of turning the beefy mixture into meatballs. They’re a little bit saucier, just as moist and savory and delicious as the original and they’re perfect over egg noodles or mashed potatoes. (And guess what else? They’re super easy to make, too!)

If you’re used to making regular ol’ Salisbury Steak, the process here is going to look pretty familiar to you. It’s just that the end project is a little more bite-sized. There’s no French Onion soup mix or canned cream of mushroom soup or other shortcuts here, just ground beef, breadcrumbs, egg, mustard, ketchup, and Worcestershire sauce that all get mixed together and rolled into balls.

You brown those in a pan just long enough to get some nice color on them so you can get started on the gravy. Now, you usually see one of two choices with Salisbury Steak, a mushroom gravy or an onion gravy, but this time around we’ve gone with a rich and savory onion gravy.

You sauté the onions until they’re soft, stir in some butter and flour, and then some beef broth that you let bubble until it’s thickened to your liking.

It’s a little saucier than a traditional gravy but that just means it’s perfect for ladling over noodles or mashed potatoes or even rice. And since the meatballs simmer in that sauce, you can be sure they come out ever so moist and flavorful. There’s not a lot to argue with here… it’s Salisbury Steak in meatball form and we all know that Salisbury Steak is good eating!