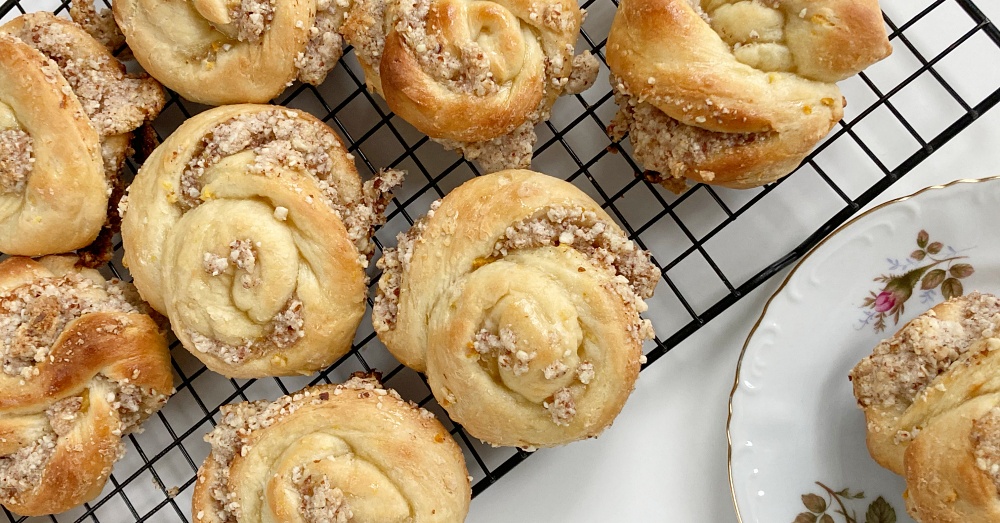 It doesn’t get much better than this.

There are few foods that bring as much enjoyment as a perfectly-made sweet roll. This breakfast treat is enjoyed by just about everyone and brings some fun to the table in the morning hours. Unlike some of the traditional cinnamon-heavy sweet rolls that are dripping in icing, these ring-a-ling sweet rolls have a subtle almond filling and are covered in an ever-so-slightly sweet orange juice glaze.

They aren’t too heavy or too sticky and that’s why they suit a lot of different tastes. In fact, this recipe has been pleasing people for generations as it was first introduced in 1955 after it was submitted for a recipe contest by Bertha Jorgensen of Portland, Oregon. After making them myself I can certainly see why this recipe won prizes!

To begin making the dough for these rolls you’ll need to combine the dry ingredients and then melt the butter in some milk until it’s warmed, but not too hot. Combine this with the rest of the dough ingredients, including some freshly-grated orange zest.

Then you’ll need to let this rise for 30-50 minutes. I let mine go 60 minutes and it rose beautifully. While it’s rising you can work on the filling, which is a yummy blend of ground almonds, cinnamon, nutmeg, powdered sugar, and butter.

When the dough had doubled in size I rolled it out on my handy dandy baking mat. This thing is a lifesaver and came in useful in 3 ways during baking. It keep the work top clean, it proved a non-stick surface, and I was able to use the measurements to roll out the dough to 12″x22″.

The next step is to spoon the filling over one half of the dough vertically and then fold the other half over the filled side. I used flexible mat to do this and I can’t recommend it enough. After that use a bench scraper to cut the dough into 20 or so strips.

For the next step you’ll need to carefully twist each strip of dough 4 or 5 times, then gently roll that into a flat spiral. Some of the filling does fall out when you do this, but I just took the fallen pieces and placed them into the center of each sweet roll.

After they rise again bake them for 9 minutes and while they’re in the oven you can make the glaze- which is just orange juice with a small amount of powdered sugar mixed in. Then brush the rolls with the glaze and bake for a few more minutes.

Once these are out of the oven you’re left with lovely rolls that aren’t cloyingly sweet. They are great with tea or coffee, but they also make the ideal midnight snack, too.

I can honestly say these are the best sweet rolls I’ve ever made!