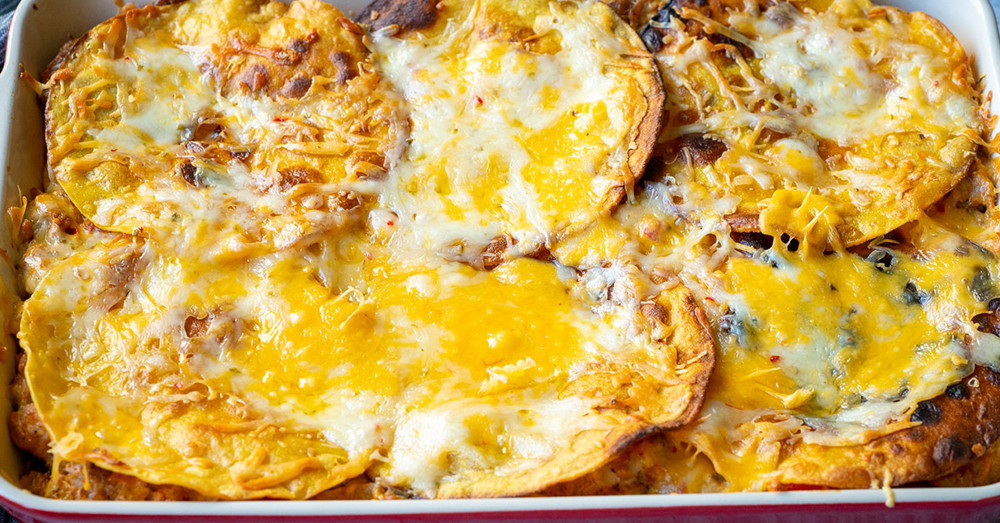 Why haven’t we been making it this way all along?

The King Ranch Casserole is a classic bold and zesty Texas dish and nine times out of ten that you encounter it, it’s going to include chicken. But not today, friends! This time it’s full of meaty, savory pulled pork and I don’t know that I’ll be going back to the original anytime soon. It’s like pork and all of that cheesy tex-mex flavor are just meant to be together, and it’s a cinch to pull together when you’ve got leftovers laying around.

One standby of King Ranch Casserole is cream of mushroom soup, but we’re not going that route. Ours is more of a from-scratch situation, but that doesn’t mean it’s in any way hard to make. Ours relies on sour cream for creaminess and building the sauce is a simple matter of sauteeing garlic, onion, and bell pepper before stirring in some flour and simmering down some beef broth. There’s also lime juice and cumin and chili powder and tomatoes and green chilies involved… which is to say there’s no shortage of zesty flavor here.

The pork and sour cream get folded into that mixture, which then gets layered with corn tortillas and a mixture of cheddar and pepper jack (and plenty of it). After it hangs out in the oven, it emerges as layers and layers of bubbly bold flavor with some tantalizing cheese pulls and crispy corn tortilla edges to boot. One bite will remind you why King Ranch Casserole is such an enduring classic.

Is there anything wrong with a King Ranch Chicken Casserole? No, not in the slightest. But pork is more moist, a little fattier, and so has a way of really nestling into that creamy cheesy sauce as if it belongs there. Because it’s a weightier protein, it doesn’t just fade into the background like chicken tends to do, it stands up to all that flavor in its own right so it competes as a major player with those other bold flavors.