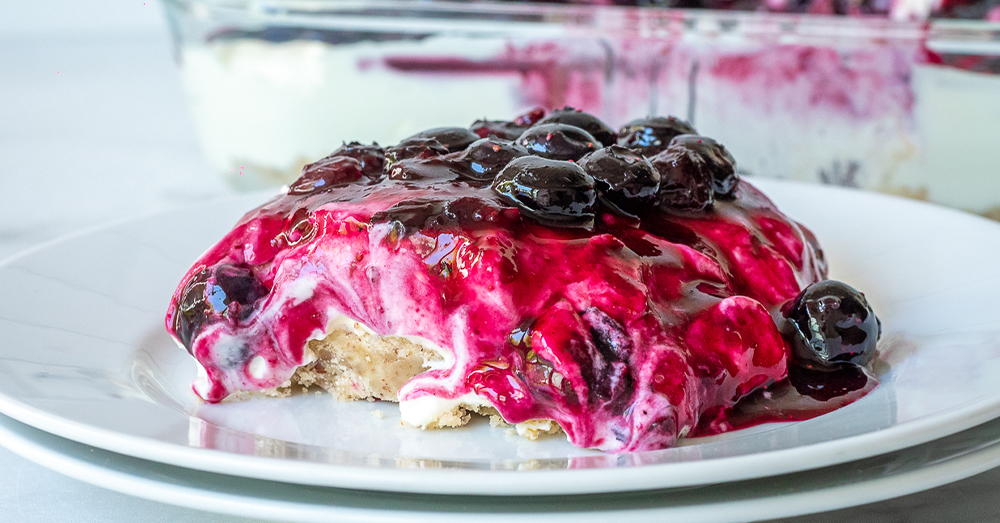 A nearly no-bake icebox treat that’s so easy to love.

There are a lot of things that Magnolia Bakery does right but what it does best are classic American desserts that aren’t fussy or pretentious and — even though they’re made out of a world-renowned bakery — just take like home. Case in point, this Blueberry Jamboree. It’s more or less an icebox cake that combines simple ingredients into an almost no-bake confection that’s served up in slices to share cool and creamy blueberry-topped joy far and wide. Or maybe just in your own kitchen… that’s the joy of a copycat recipe, it’s all for you and your loved ones.

The first order of business here is the topping because you want enough time to cook those blueberries down a bit and to chill it. You just combine blueberries in a saucepan with some white and brown sugar, cook it until the sugar has dissolved, and then stir in a cornstarch slurry to thicken things up. Some more blueberries go in at the end (with some lemon zest too) so you have some nice and saucy berries and some that still have a fresh pop. It’s delightful.

Then there’s the crust. It’s the only part that requires baking and it’s a short stint at that. You’ll process some pecans in the food processor, nice and fine…

… and mix them up with some flour and melted butter into a nutty but doughy mass. You’ll press that into a baking dish and give it fifteen minutes to set up in the oven.

While it bakes, you’ll work on the filling and while you might see Cool Whip in desserts like this, here you’re going for cool and creamy authenticity with real homemade whipped cream. (Nothing beats it!) Just whip the cream until it starts to thicken, and then add some powdered sugar and continue beating it until it’s pretty stiff. In a separate bowl, you’ll beat some cream cheese until it’s smooth, and then stir the two together until they’re combined and creamy. There’s no chance of lumps with the two bowl method.

The cream cheese/whipped cream filling goes over the crust and the chilled blueberry sauce goes over the top and then everything chills until it’s at least somewhat sliceable.

It’ll take at least an hour (more is better) until it sets up, but no one is going to care if things are a bit drippy. This is all about the cool and creamy combination of fresh, bright blueberries, a sweet and airy cream cheese filling, and a crisp and nutty crust. Drippy but dreamy, which is nothing to complain about.