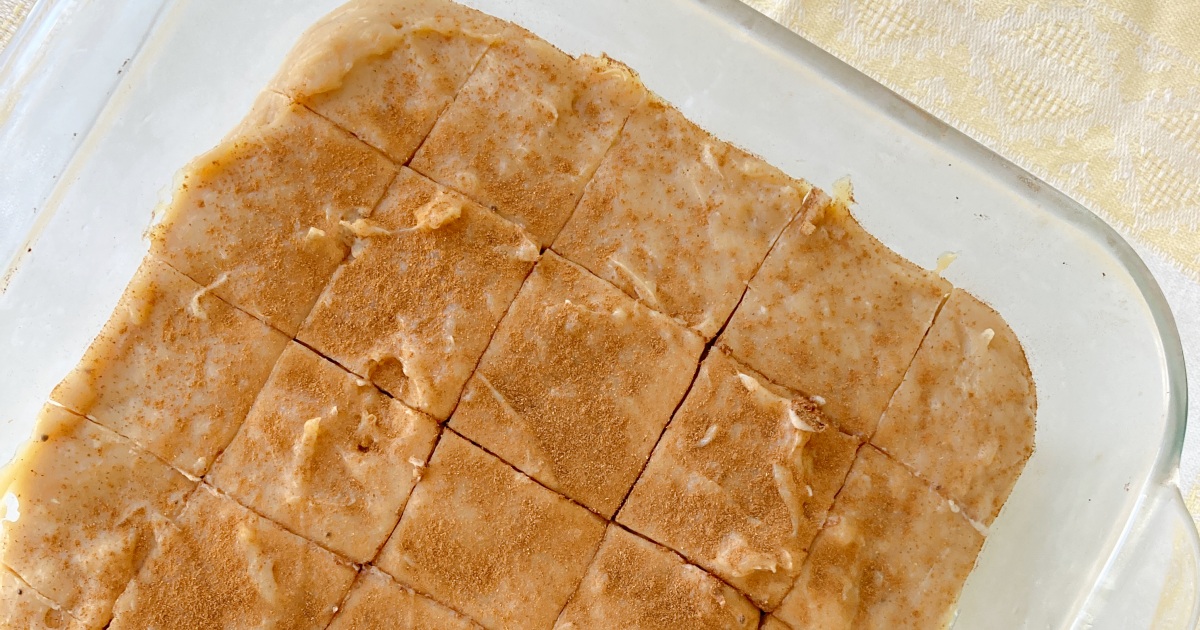 The flavors of Christmas together in cute little squares.

Across many Spanish-speaking countries a soft dessert called natilla is popular. It’s sort of like a custard when made with eggs. But, a particular version made in Colombia has no eggs and also has a chewy texture that makes this special treat. It’s almost like a cross between flan and fudge- very springy. And it’s served cut into squares. This dessert is commonly made to celebrate Christmas and is a wonderful addition to your holiday sweets and candies- regardless of which country you’re in!

To begin making this recipe you’ll need 1 can of sweetened condensed milk and 3 cans of evaporated milk. You gently heat these up along with some cinnamon sticks and some other spices, including ground cloves. I used whole cloves that I ground up and it made it so much more flavorful. I can really recommend grinding your own spices for this recipe!

It smelled like eggnog in my kitchen when I was making this and it really got me in the holiday spirit! But, rather than tasting of eggnog, the finished result is much more complex since there’s also shredded coconut in the recipe as well. This gives it some bite, but also underscores the spices in such a creamy way. It’s really a very special combination of flavors.

The thickness of the sweetened condensed milk combined with some cornstarch is what makes this natilla set up properly. But, just to be double sure you also need to chill this natilla in the fridge before attempting to cut it. That way that you end up with those nice, clean squares when you cut into it.

Be sure to sprinkle some cinnamon on top before cutting for an extra hit of festive flavor.

I grew up having fudge at Christmas (white chocolate, peanut butter, double chocolate, red-and-green, you name a fudge and I’ve certainly tried it). But, after trying this recipe I’m sold on a new tradition. It’s just the perfect texture and has so much flavor in every bite. Plus, if you’re someone who shies away from eating eggs, this is a great flan-like dessert that doesn’t have any eggs to complicate the cooking (or eating) process.