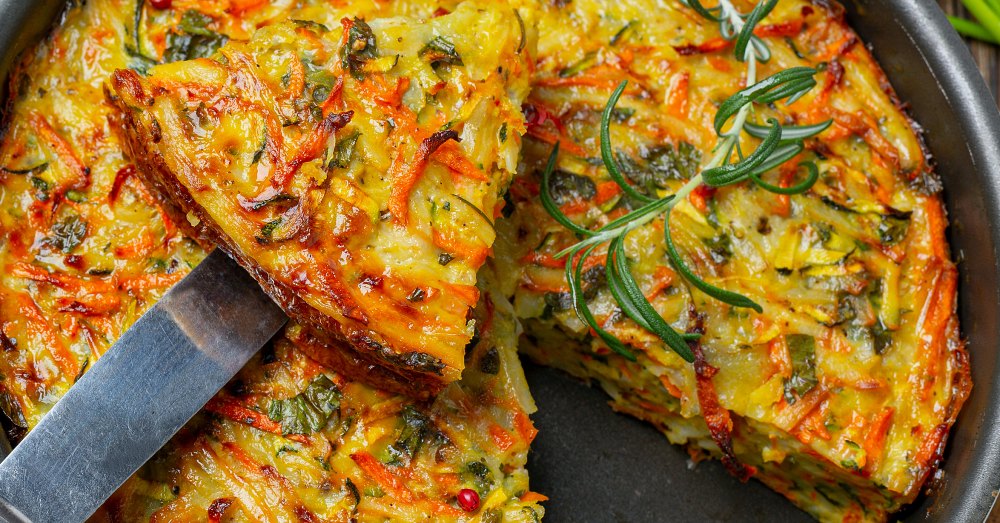 The top gets so crispy and golden.

You may have grown up thinking a kugel was a sweet dish. Or you may have had a noodle kugel. But, savory vegetable kugels are an excellent way to have this traditional dish as well. This delicious zucchini kugel uses zucchini, carrots, onions, and potatoes for a dish that is bright and colorful, as well as tasty. This kugel also has a lot of flavor from lemon zest and freshly chopped basil and rosemary.

The key to getting the perfect kugel is to eliminate as much moisture as possible before (and even during) baking. You’ll have to sauté the shredded veggies and then drain them before adding to the rest of the ingredients. The other thing that helps to drive off moisture is preheating your pan with some oil in it before adding the kugel mixture.

You’ll also need to crisp up the shredded potato before making the final mixture as well. This double cooking is worth the effort because in the end you’ll have a firm and crispy kugel.

Once the veggies are cooked and drained and the potatoes are crisped, combine the herbs and spices with 4 eggs. This egg mixture is what binds the whole recipe together, but there are so many wonderful flavors in this dish that it doesn’t taste like a quiche or a breakfast- although there’s nothing stopping you from having this for the first meal of the day!

After adding the egg and veggie mixture to the hot pan bake the kugel for 40-55 minutes. If you notice some moisture in the pan then you’ll need carefully remove the pan from the oven and gently drain off any excess moisture. When it’s done the top should be golden brown and crispy and the center should be completely set. Since this comes out of the oven piping hot make sure to let it cool for 20 minutes before slicing into wedges.

Kugels are traditional to Jewish cuisine and are Kosher. Since there’s no meat in this recipe it’s also perfect for a vegetarian main dish at dinner or even as a side dish. This is a hearty addition to the table that’s bursting with fresh flavors. What a tasty way to use up those zucchini!

Recipe adapted from My Jewish Learning.