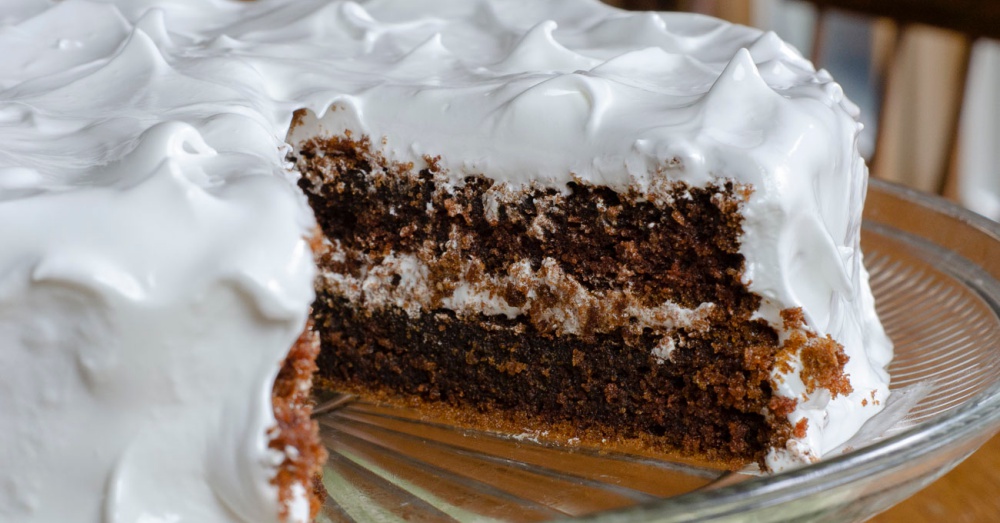 When I came across this recipe in an old recipe tin, there were a few things that I instantly liked about it. I liked that it was attributed to a person in the title – Vida Nelson’s Chocolate Cake – as if it was a cake so good that Vida was famous in her community for it. I liked the simple ‘Good’ written in parentheses next to it, as if the writer had jotted down other recipes with it that maybe weren’t so good and she wanted to remember which ones to actually cook in the future. I liked that some ingredients go by terms we don’t even use anymore, a ‘block’ of butter, or ‘sweet milk.’ I even liked that there were no instructions at all, just a few key notations next to ingredients.

Vida Nelson’s Chocolate Cake appears on a set of silky-soft papers that have been folded like a book with various recipes written quickly across them. Most have a name listed beneath the title. Most also have instructions with them, but this one does not. One ‘recipe’ included in the makeshift book is just a quick tip from a ‘Mrs. Nellie Malloy’ to “Slice bananas crosswise, dip in mayonnaise and then in chopped nuts, serve on crisp lettuce leaves.” (Which does not sound particularly appetizing to me.)

2 eggs (unbeaten), drop in one at time. 1 teaspoon vanilla

7 minute icing between and on top of cake

The papers came out of an old recipe tin that I recently found and started cooking my way through. I call it the Recipe Tin Project. It’s chock full of old recipe cards, most of which seem to be from the ’60s and ’70s. I love food history, and the idea is to breathe new life into these recipes from the past and maybe learn a technique or two from them along the way. There are everlasting classics in there like Carrot Cake and some not so timeless creations like Jellied Chicken Gumbo.

When I saw ‘sweet milk’ written on this recipe, I wasn’t sure what exactly it meant. I wondered if it might mean sweetened condensed milk, but a quick internet search revealed that it used to be a common way to clarify whether a recipe called for buttermilk or regular whole milk. ‘Squares’ of bakers chocolate was a little vague, since the amount that ends up totaling depends entirely on the brand of chocolate you purchase. I went with four ounces, which is a standard bar of bakers chocolate, but I think the cake could’ve handled a full eight ounces for a bigger punch of chocolate flavor.

Since there were no instructions, I put together the batter in a pretty standard way, creaming together the butter and sugar, adding the eggs one at a time, and then alternating the dry ingredients and the milk. (And of course I sifted the flour and baking soda together three times as the writer suggested). The full recipe as I made it is listed below.

The writer indicates that this cake makes three layers, though I baked my cakes in two 9-inch pans. With the amount of batter that you end up with, you could definitely do three 8-inch pans and maybe even three 6-inch pans for thicker layers.

I also filled and frosted with Seven Minute Frosting (or Icing, if you prefer) just as Vida Nelson intended. It goes so well with this sweet and moist cake and is a lovely contrast to the chocolate. I only wish there had been a recipe in the box for the frosting as well, but I went ahead and used our 12Tomatoes Seven Minute Frosting recipe, which is totally traditional and perfect with this cake.