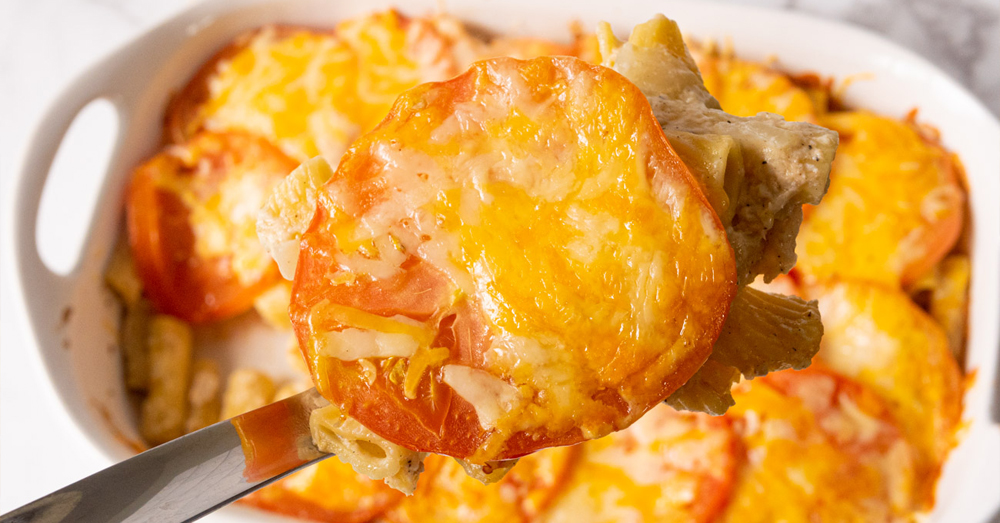 Tuna Melt fan? This is the easy dinner bake for you!

A tuna sandwich is one thing – a great thing – but a tuna melt takes it to the next level with plenty of melty cheese and slices of fresh juicy tomatoes. And this casserole… well, this casserole takes all of those great things – hearty tuna, cheesiness, and bright tomatoes – and pairs them with the carby goodness of pasta. The tuna melt flavors are all there, just in the comforting form of casserole!

There aren’t a lot of components here to worry about but the handful that are included work together so well. You start by sauteeing some onions until they’re soft, and then adding some flour and milk to form the base of the simple but creamy sauce.

This wouldn’t be a Tuna Melt Casserole without the tuna, and that gets stirred into some cooked rigatoni along with some Swiss and cheddar.

Fresh sliced tomatoes cover the top, along with another dusting of the two cheeses.

As it bakes, everything gets hot and bubbly, so you get the same delicious creamy, melty action that you get with the sandwich version.

You could grill up a bunch of tuna melts for your family on a busy weeknight, sure. I’m certainly not saying there’s anything wrong with sandwiches. But… you could opt instead to make something just as comforting and just as delicious that happens to come out of a single baking dish, like our Tuna Melt Casserole!

Recipe adapted from Noshing with the Nolands.