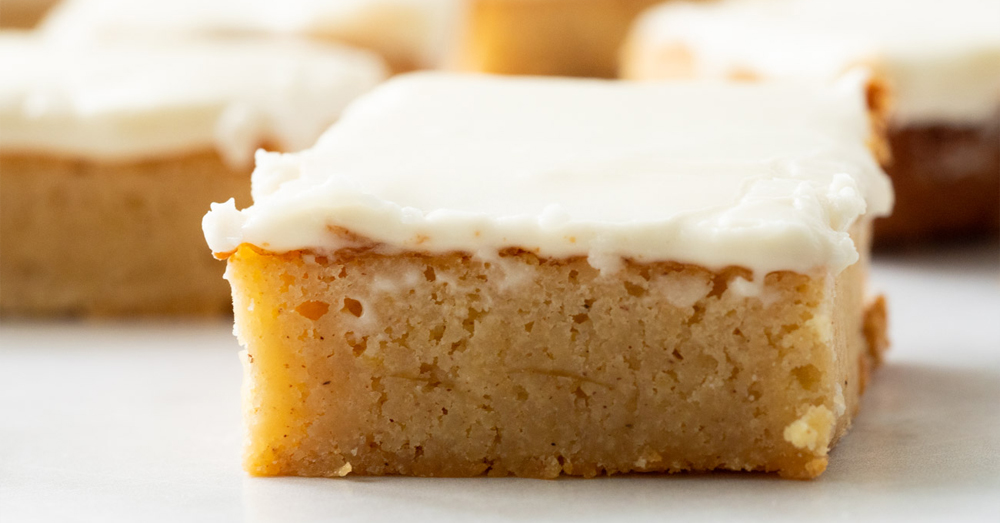 Can vanilla brownies beat chocolate brownies?! You be the judge!

It’s no secret we’re big fans of dessert around here. Pies, cakes, cookies, pudding, ice cream, you name it, we love it. That includes brownies. Traditionally, brownies are a rich, chocolatey treat, but in today’s recipe, I’ll show you how to make vanilla brownies – with vanilla frosting. What’s not to love about that?

Just look at these beauties! If you’re anything like me, then you love the frosting just as much as the brownie/cake/cookie it comes on. This recipe certainly delivers in that department. If you don’t like that much frosting, you can of course, just not use all of it. I won’t pretend to understand that mindset, but I respect it!

To get things started, preheat the oven to 350°, and take out a 9×13 baking dish. You’ll want to spray the dish with cooking spray and also sprinkle flour over the dish to prevent the brownies from sticking to the pan and burning around the edges.

This recipe starts off strong by melting butter and white chocolate chips together on the stove. Remove the mixture once melted, then let cool for a bit before mixing in the rest of the ingredients for the brownies. Then it’s just a matter of pouring the batter into the prepared dish and baking for 25-30 minutes!

Now let’s get to the good part. Not that the brownies themselves aren’t good, but you know I’m all about the frosting! This recipe does not disappoint. Start by softening some butter and mixing in powdered sugar. Add in some vanilla and almond extract, and top off with a little bit of milk! You can add more or less depending on how thick you want your frosting to be.

That’s it! These Triple Vanilla Brownies may look like vanilla sheet cake, but trust me, they are so much better! Combine the dense, white chocolate and vanilla flavor with the rich and creamy frosting, and you’re sure to have a hit on your hands.