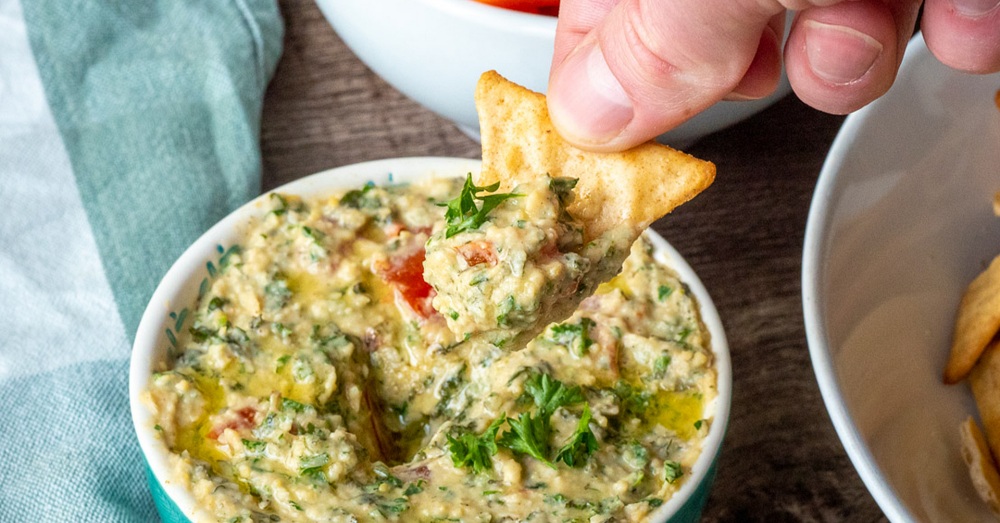 The perfect dip for pita chips and more.

Hummus has been one of the best snacking foods and party fare at my house for a long time. It’s easy to buy pre-made from the store, but sometimes it’s nice to make your own from scratch. I like to keep garbanzo beans and tahini on hand for when I’m craving some freshly-made hummus to dip my veggies and carrots in. Since you can buy shelf stable tahini in most groceries (often near the nut butters), it’s super easy to keep these ingredients in the cupboard. And, I recently discovered the joy of tabbouleh style hummus, which means I’ve been making a lot more of this tasty dip lately.

Tabbouleh has been served in Levantine nations for thousands of years. The name literally translates to “dip” in Arabic as this bulgar wheat salad contains spices that are perfectly suited for dipping things in. Hummus also has a long history in these same countries and today is considered a healthy dip for all kinds of finger foods, as well as a nice side sauce for rice and pitas. This tabbouleh style hummus has the creaminess of hummus combined with the zesty flavor of tabbouleh for a refreshing addition to a variety of meals.

To make this recipe begin by draining a can of garbanzo beans. Some people swear by removing any remaining skins on the beans, but I skip this step since I find that it doesn’t really make the finished result that much smoother.

In a blender or food processor combine the beans with a little bit of water, lemon juice, tahini, garlic, olive, cumin, allspice, and salt. Tahini is a paste made from sesame seeds that imparts a creamy, nutty flavor to foods. You want to blend this mixture until it’s as smooth as possible. When you think it’s done scrape down the sides of the mixing container, stir, and pulse again for the creamiest hummus.

Then fold in chopped parsley, mint, and tomatoes. For this recipe we omitted the bulgar wheat that’s usually in tabbouleh, but you can add some in if you’re craving more texture. In this case you would fold in 1 cup cooked bulgar wheat along with the fresh herbs and tomatoes.

Scoop the finished hummus into a serving bowl for dipping and garnish with a small pour of olive oil on top if desired. Serve with corn chips, baby carrots, or toasted pita wedges as an appetizer or snack. I also like to add this style of hummus to a rice and chicken plate served Mediterranean style with Greek salad and some feta cheese. However you serve this tabbouleh style hummus up, the flavor will be a perfect compliment veggies, meat, and chips alike.

Recipe adapted from Eats Well With Others.