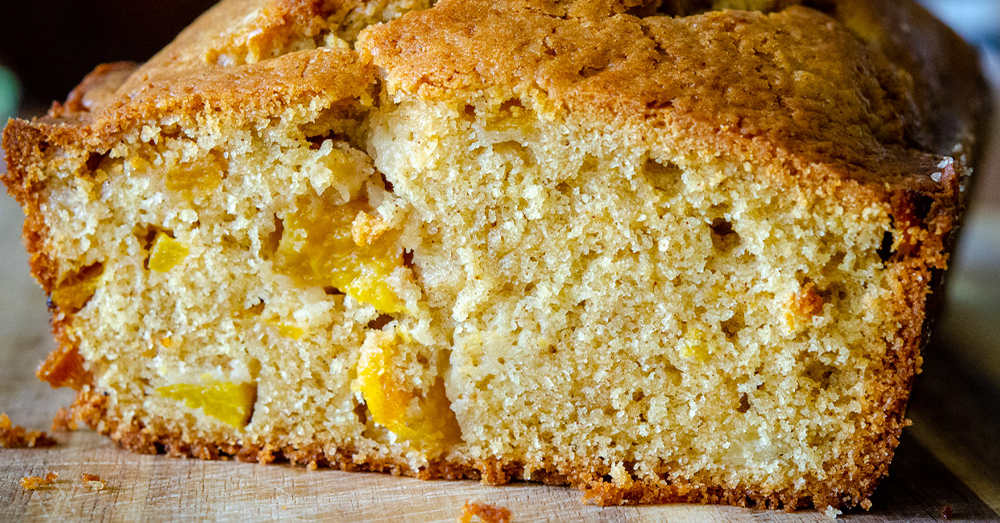 The world of quick breads is so much wider than a basic loaf of banana bread. See, there’s a zillion breads out there that you can fill with fruit or veggies, like zucchini bread or pineapple bread or this here Southern Peach Bread. True to its name, it’s studded with juicy fresh peaches and spiced and sweetened to perfection, but don’t let that fool you into thinking even for a second that it’s difficult to make. It’s quick. It’s simple. And it sure is delicious.

The bread batter here isn’t based on vanilla. Rather, it’s flavored with brown sugar, cinnamon, nutmeg, cloves, and allspice, which is the perfect combination to complement sweet peaches. You might expect those spices to have sort of a winter holiday flair, but it’s quite the contrary. They lift up and accentuate the peaches in the best way – you can taste the spice mixture in the finished bread, but it’s not overwhelming.

And all you have to do is mix everything together! There’s no kneading or rising or folding or shaping. Just some stirring, and pretty much anyone can handle that. The batter will seem dense and the baking time is rather long but I promise that the end result is moist, delicious, and not dense at all.

It’s a bread with a southern tradition but you don’t have to live anywhere near the south to make it. And if it’s not peach season? No big deal. This loaf works just fine with canned or frozen fruit. In fact, it’s a great way to get a little taste of summer on the darker days of the year.

Recipe adapted from That Skinny Chick Can Bake.