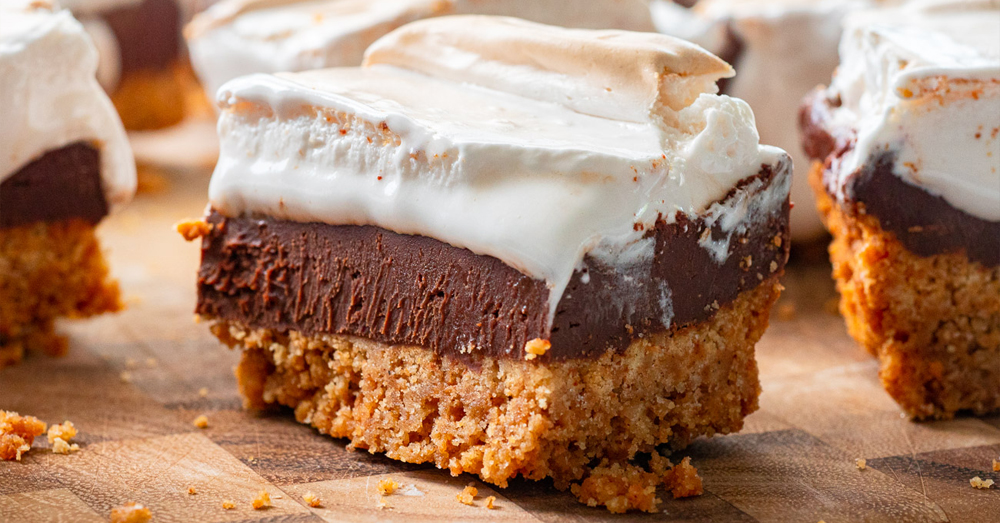 Just look at those luscious layers! I’m absolutely in love with these S’Mores Fudge Bars. They might taste even better than the original, in my opinion, and they’re certainly a lot less messy to eat! Let’s take a look at the three components of these decadent dessert bars.

First, there’s the graham cracker crust with a bit of sugar, a pinch of cinnamon, and butter. Next, we have indulgent fudge made of melted chocolate chips and sweetened condensed milk. Finally, the marshmallow fluff. This ain’t the store-bought stuff – it’s all homemade and easier to make than you might think! Take a look at the video below to see how it all comes together.

To get started, preheat the oven to 350°F. Line an 8×8-inch baking pan with foil and set aside. We’ll make the crust first by combining graham crackers, sugar, cinnamon, and salt in the bowl of a food processor and pulsing until finely ground. Add melted butter and pulse until mixture is moistened. Press this mixture into the bottom of the prepared baking pan and bake for 10 minutes. Remove to a cooling rack and let cool completely.

While the crust is cooling, let’s move on to the fudgy filling. This is such a simple filling, but it tastes so good! Combine chocolate chips and condensed milk in a small saucepan set over medium-low heat. Cook until mixture is melted, thick, and smooth, stirring constantly. Then, pour over graham cracker crust. Place in the refrigerator while making the marshmallow topping.

Here’s where the magic happens. Don’t be intimidated by making your own marshmallow topping! Start by beating egg whites and cream of tartar in a large bowl until soft peaks form. Set aside. In a small saucepan, combine sugar, corn syrup, water, and salt. Bring the mixture to a boil and continue to cook until a candy thermometer registers exactly 240°F. Immediately remove from heat.

Next, start beating the egg whites again, on low speed, while carefully pouring the corn syrup mixture into the bowl. Increase speed to medium-high and beat until the mixture is thick and glossy and looks like marshmallow fluff, about 7 minutes. Add in the vanilla and beat until combined. Spread marshmallow topping evenly over the chocolate fudge layer. Optional: Place the pan under the broiler and broil for 1 minute, or until lightly golden.

These dessert bars taste as good as they look! Trust me, your family will be begging you to make these all the time!

For the marshmallow topping:

Recipe adapted from Handle the Heat.