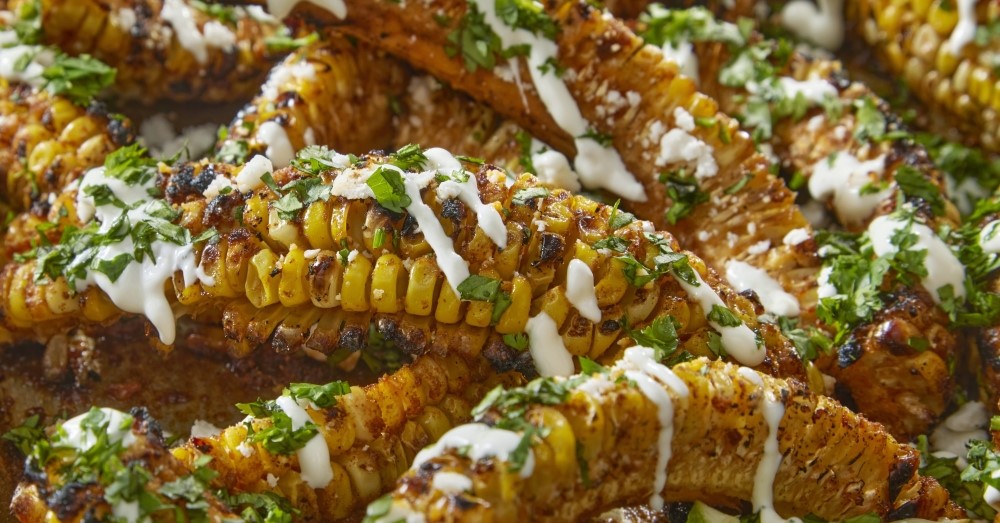 A deliciously fun way to oven bake corn on the cob with rich spices and the pop of cilantro and citrus.

Sheet pan BBQ corn ribs are a deliciously fresh take on a simple classic, making corn on the cob a bright, sexy side dish in less than 30 minutes. Corn ribs are fun to prepare and eat, and have become a popular preparation method for social media savvy cooks. Gone are the huge ears of corn splashed with butter then plonked in a bowl, replaced by sleekly curved and seasoned corn strips cooked on a sheet pan, loaded with irresistible flavors and finished with a delightfully creamy dipping sauce.

Corn ribs are strips of corn on the cob that have been cut lengthwise into quarters. They take on the ribs moniker based on their resemblance to the curvature of BBQ ribs when they’re baked or barbecued, curling up slightly as they cook. It’s a great visual prep method that also ends with tastier, juicier corn that pops on the palate and tongue.

Our sheet pan BBQ corn ribs take on classical pantry spices well matched with a simple yet zesty lime crema. The corn is juicy and sweet yet bursts with flavor from ingredients such as paprika, oregano, and a vibrant mix of lime and fresh cilantro.

Cutting each cob down into quarters is the only part of the process that could be considered difficult at all, but a sharp knife, keen eye and some heft when cleaving through the cob can ensure perfect results. The oven does the rest in just 25 minutes, and you can take just about any direction with dipping sauces or vinaigrettes.

Using a homemade lime crema is the ideal accompaniment for these corn ribs. It is brightly refreshing and tangy, an easy but flavorful addition which smooths out the coated corn’s punchier elements. The combination of ingredients – just lime, sour cream, and a few pantry spices – is so fundamentally simple you can take the crema in any direction you want, by adding a spicier element to the sauce, or keep it refreshing and creamier while adding more kick to the corn ribs instead.

A delicious and visually exciting way to cook corn such as bbq corn ribs is a brilliant simple dish that can complement meat off the grill with flair, and without having to work too hard to create the dish that you can’t enjoy the results!

For the BBQ Corn Ribs

For the Lime Crema