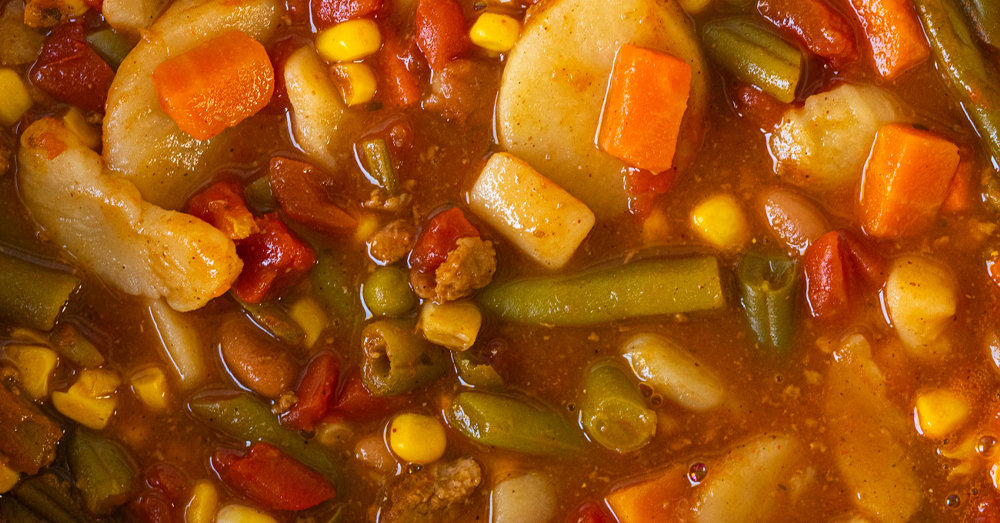 Can you open a can? Turn on your stove? Well then, my friend, you’re well on your way to one seriously delicious bowl of soup. See, this Seven Can Soup takes (you guessed it) seven different canned goods and turns them into a soup that’s far tastier than you ever would have imagined something entirely made up of pantry goods could be. It’s a little bit of a Cinderella moment – somehow seven basic canned goods transform into a filling soup that’s dazzling in its yumminess. (And it doesn’t hurt that it also happens to be nearly effortless to make.)

I’m not kidding when I say that there’s little more to do here than open cans and heat them up. You start with a big pot. And a can of turkey chili.

Add a can of sliced potatoes…

… and a can of diced tomatoes.

Add a can of green beans (no need to drain anything!)…

a can of mixed veggies and a can of vegetable soup.

A can of corn sweetens things up a tad. And all that’s left to do is bring everything to a boil.

Let it all simmer for a bit (I’m talking twenty minutes, that’s it) and the flavors meld into a whole that’s greater than the sum of its parts.

This recipe is a long-loved Weight Watchers one – you might know it as ‘Zero Point Soup’ – and it does have a fair amount of nutrients going on for something without any fresh produce. But mostly, it’s strangely delicious. I don’t know how it happens. I don’t know how seven simple cans come together to create something so satisfying; I’m just glad they do.