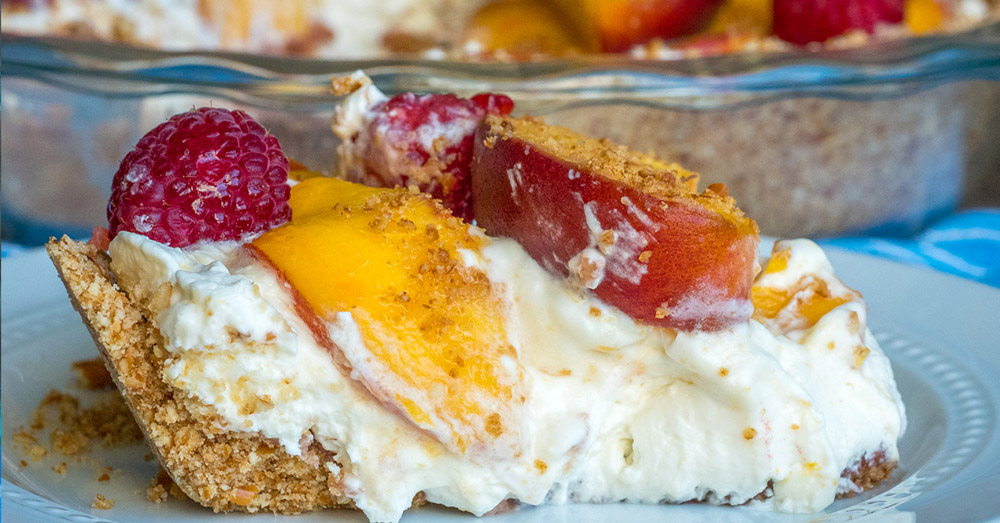 A salty-sweet pie that’s a cinch to make.

When most of us make dessert, it’s because we want to cap the meal off with something delightfully sweet, but I happen to think that the best desserts are the ones that balance their sweetness with some saltiness. This Peaches and Cream Pretzel Pie is the perfect example. While it has plenty of fresh sweet peaches and raspberries and honey (and a sweet creamy filling too), it’s set off by a perfectly salty crispy pretzel crust. And the good news is that not only is it perfectly balanced, it’s also a cinch to make.

This pie is almost no-bake. The crust just needs less than ten minutes in the oven to set up and that’s it as far as actual baking time goes. You just mix together butter, crushed pretzels, and a bit of brown sugar and press most of the mixture into a pie dish. The rest you sprinkle over a baking sheet and you put them both in the oven to brown a bit.

While the crust bakes, you can make the filling, which is simply cream cheese, powdered sugar, and heavy cream. You start by whipping the cream to add some lightness so while the mixture is rich and creamy, it’s not heavy-handed about it. But it doesn’t go into the crust quite yet! Once the crust has cooled, you spread a bit of raspberry jam over it for a little extra dose of tart-sweet fruit flavor before you fill it with the cream cheese mixture.

The filling needs to chill for a bit to set, and once that happens the final flourish is a topping of fresh peaches and raspberries that have been tossed in honey that’s been heated enough to thin it out a bit.

And those extra buttery brown sugary pretzel crumbs you baked earlier? Well, those get sprinkled over the honey glazed fruit to echo the salty crunch of the crust. It’s a sweet dessert, yes, but thanks to the unexpected saltiness of crunchy pretzels, it’s also so much more.

Recipe adapted from Half Baked Harvest.