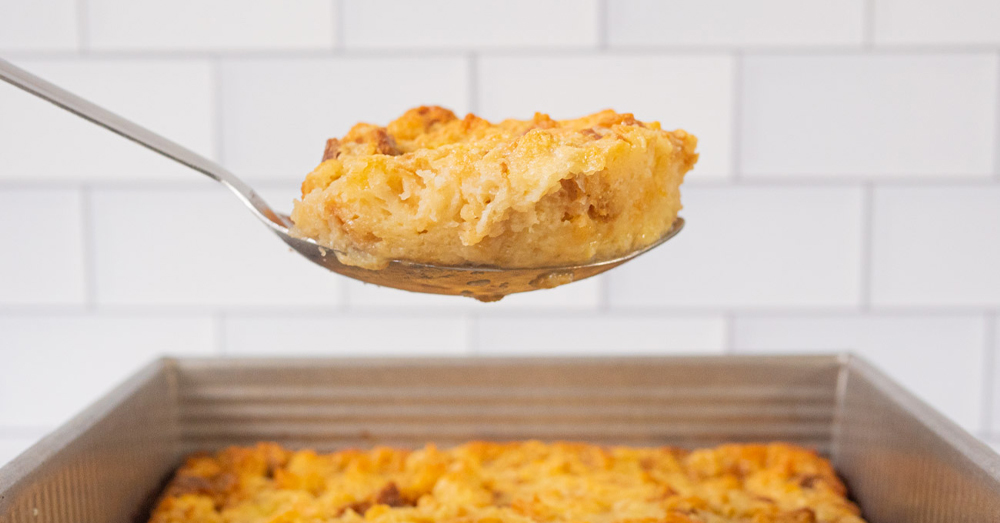 Biscuit Pudding is just what it sounds like – a baked pudding made with biscuits. While that might seem a little strange at first, just take a deep breath and think of bread pudding, because this has all the same great qualities – a creamy and custardy bite of soft, sweet vanilla doughiness. It just happens to use leftover biscuits, and while that might not be a frequent occurrence since biscuits are perfectly delightful all on their own, it’s worth making a few extra so you can whip up a batch of this.

You start with a few torn up biscuits and let them soak in some milk until they’ve softened.

And then you stir in some sugar, eggs, vanilla, melted butter, and a tad more milk.

The only thing left to do is bake. That does take a bit of time, somewhere between forty and fifty minutes, but when it emerges you get a golden brown top and an incredibly comforting sweet and soft interior. Unlike bread pudding, it’s not all-sweet-all-the-time since most biscuits are a bit saltier than the bread you might use for such a bake.

While you could tuck in some berries, raisins, or cinnamon before baking, it’s absolutely perfect served simply with a drizzle of maple syrup or a dollop of whipped cream. It’s the type of old-fashioned recipe that turns leftovers into so much more, like a magic trick where day-old stale biscuits become a custardy sweet treat.

Recipe adapted from Syrup and Biscuits.