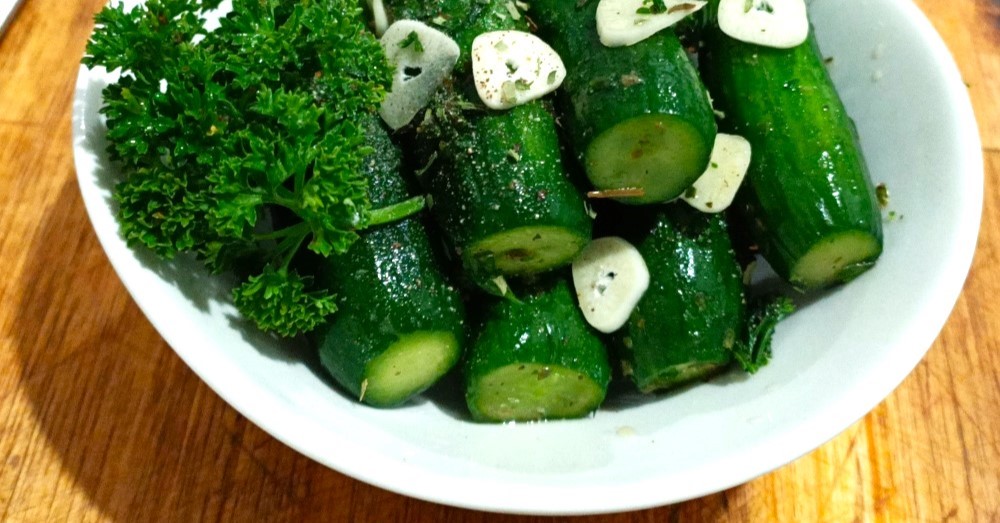 A great tasting way to lightly pickle cues with no brine or vinegar!

I began my love affair with pickled cucumbers during my first visit to the United States, many moons ago. They were always served with a burger and fries, so natural curiosity (and a professional appetite) got me chomping on them along with the rest of my meal. I found them salty yet refreshing, and a great accompaniment for a cold beer. Even now, some 15 years later, I usually have a jar of pickled cucumbers in the fridge for snack times.

Doing my own pickling has never been on my list of things to do, although that stance has changed, a little. I had no idea that you could make a sharp, refreshing pickled cucumber by using salt, herbs and garlic, in just a few hours, all without the use of brine or vinegar.

The recipe below is a variation on a time honored Russian staple. It’s an extremely simple way to get delightfully crunchy pickled cucumbers in a short time. All you need to do is let salt go to work over a few hours to get the cucumbers lightly fermented, while also seasoning the veg with yummy herbs and spices.

I used a combination of tarragon, marjoram, and fresh parsley, along with some slivered garlic slices to create my flavorsome mini cucumbers (Qukes). Many other herbaceous combinations can do the trick, so don’t be afraid to mix and match flavors. The only ingredients that are absolutely necessary are the cucumbers and salt, the rest is up to you!

Lightly pickled herbed cucumbers are perfect for a refreshing snack, especially if you’re looking to avoid loading up on carbs such as chips or cookies. Now that I’ve done this simple recipe successfully, I’ll be able to do it again whenever the fancy takes me! As good as a jar of pickles can be, these taste even better!