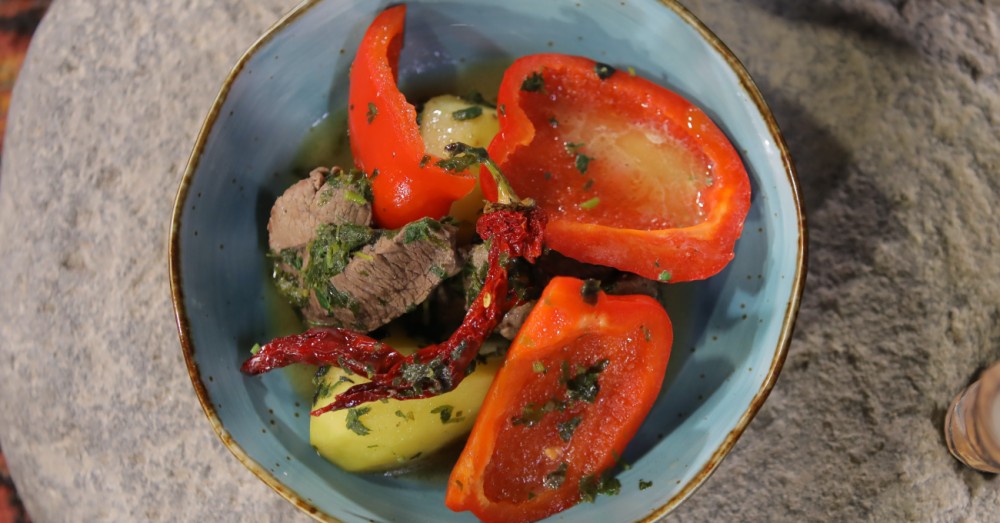 The deliciousness of a hearty meat and potatoes dish is something that translates into every culinary culture around the world and Khashlama is one of Armenia’s answers to that comfort food classic. In its simplest form, Khashlama is a dish of boiled meat and potatoes, but thanks to Armenia’s habit of adorning its dishes with copious amounts of fresh herbs, it’s also a recipe that’s full of fresh flavor. This particular version comes from the town of Gavar, which sits among the Gegham mountain range along Lake Sevan.

Khashlama is often traditionally made with lamb and relies upon a layering technique for cooking where the meat is topped with different veggies and aromatics before water is added and the whole dish is steamed or boiled. This version follows much of the traditional preparation but relies on sliced beef and some dried red chili for an added kick.

You simply add the beef to a large skillet and cook it, covered, for about five minutes so the meat starts to steam. Then you’ll season it with salt, pepper, and butter and give it a stir here and there for about a half an hour – it’s long enough and low enough for the beef to start getting tender. From there, you’ll layer it with plenty of fresh herbs, some potatoes, bell pepper, and red chili and let it cook for another thirty minutes.

For the last fifteen minutes, you’ll add some water to the pan, which brings all the flavors together to mingle into a stew-like harmony. It’s a dish that’s so easy to appreciate – comforting and full of simple, fresh flavors.