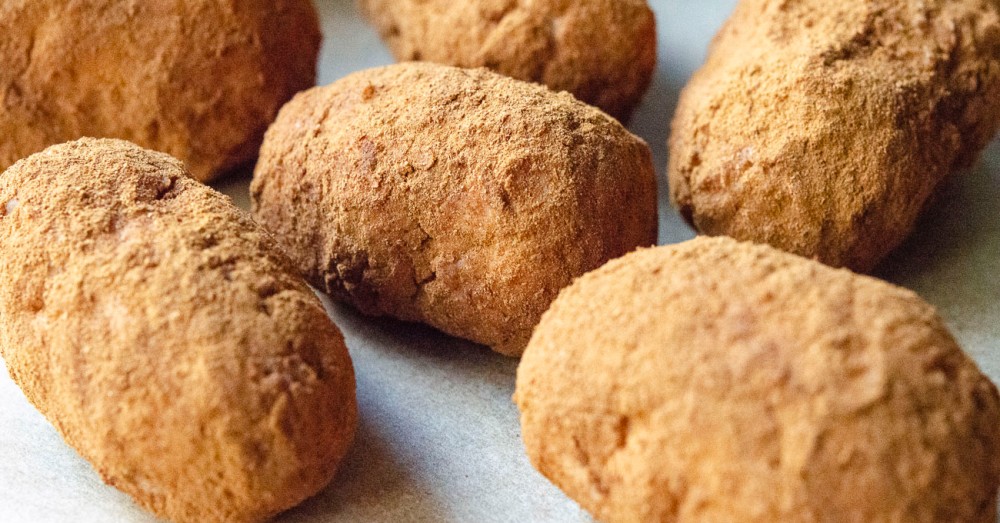 Sweet little spuds that are so easy to make.

You might be looking at this and thinking Is that a potato or a candy? It’s the latter! I can assure you that although these sure look like tiny tubers, they most definitely are a sweet treat – a sweet and creamy coconut studded treat that’s kissed with cinnamon, in fact. There’s nary a potato here but the illusion is all part of the fun of these cute (and easy to make) candies.

Whenever I make these and I get to the final rolling process, I am still a little in disbelief at how much these look like tiny potatoes I take great joy in that. As in, I find myself shouting to my family more than once, “Look at it! Doesn’t it look just like a potato?!” It’s the little things in life, friends. And these are little. And adorable. And so easy to make.

The beginning of the process looks a lot like cream cheese frosting.

You beat together butter and cream cheese until it’s nice and smooth and then add in powdered sugar so that it’s less dense but not quite as fluffy as frosting. Flaked coconut bulks the mixture up (and gives the final candies a bit of a chewy bite).

Then, you roll it into potato shape. I like to chill the mixture first so it’s easier to handle but if you’re pressed for time or you don’t mind the mess, you can roll straight away. You can make round potatoes, oblong potatoes, lumpy-bumpy potatoes.

You just roll them in cinnamon…

… and then line them all up on a baking sheet.

You’ll want to chill them one more time to firm them up and you can give them an extra coating of cinnamon after that step to make them look a little dusty.

I originally thought woah, that’s a lot of cinnamon for one candy, but in actuality, it’s just the right amount to balance out the sweet interior, which would maybe taste too sweet without it. It reminds me a lot of cream cheese frosting, but one that you get to bite right into. The coconut gives it structure and texture.

Homemade candy is often so technical, requiring candy thermometers and precise timing and boiling sugar, but these are so simple and the process is every bit as fun as the final outcome. They’re a great project to do with kids, provided you don’t mind a little bit of mess!

Recipe adapted from All Recipes.