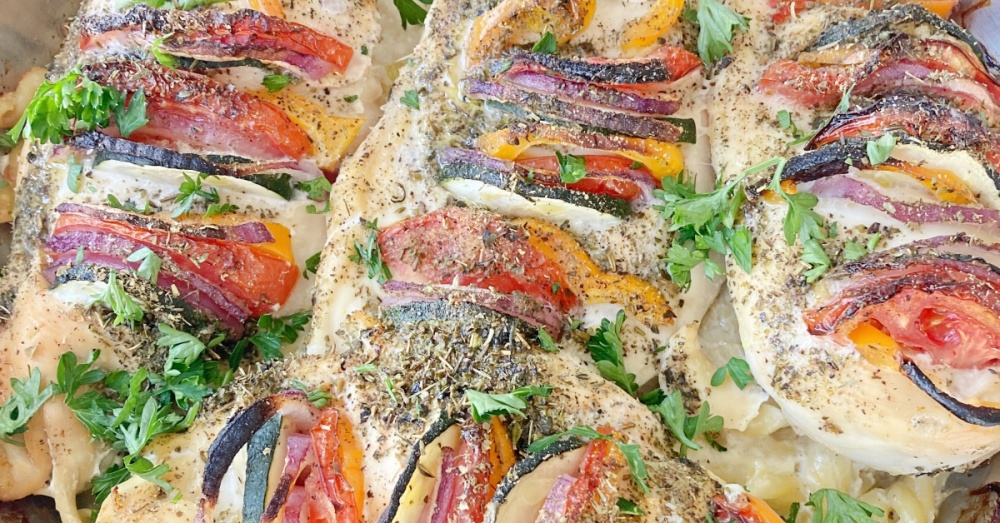 As delicious as it is beautiful.

The famed Hasselback potatoes originated in the 1940s in Sweden at a restaurant named the Hasselbacken. Their take on potatoes, slit crossways and covered in herbs and butter, allowed the flavors of the toppings to seep into the potatoes for added flavor.

This is not only a delicious way to eat your food, but it also makes for an impressive presentation. Since then the method has been applied to various dishes and the results are incredibly tasty.

This Hasselback chicken casserole has that show-stopping visual effect, but is also packed with flavor from the herbs on top which create a sort of crust.

Underneath the chicken lies a hearty bed of pasta smothered in Alfredo sauce and mozzarella and then seasoned with white pepper. I bought ziti for this recipe, but found I had some gemelli in the cupboard and used that instead for a change of pace. But, you can use traditional spirals or penne or even elbows if you’d like.

Lay the Hasselback chicken over the pasta and then cover it in herbs and bake it. Honestly, the most time consuming part of the process is getting the chicken ready, but it’s not a crazy complicated ordeal.

Take the raw chicken breasts and pinch them. Then run a sharp knife over the meat, cutting down part, but not all, of the way. Be very careful to keep your fingers out of the way. Overall it’s a quick process. Then make little veggie stacks and insert them into the slits you made in the meat.

This is an epic dinner not only in terms of looks and flavor, but also in terms of clean-up. There’s only 2 pans, the pasta pan and the casserole pan. For such a stunning meal this is a win in my book.

Once you slice into the chicken you get tender meat that’s been flavored with the veggies in the most wonderful way. This is one of the meals I’ve been obsessed with lately as it never fails to impress and is packed with so many rich flavors.