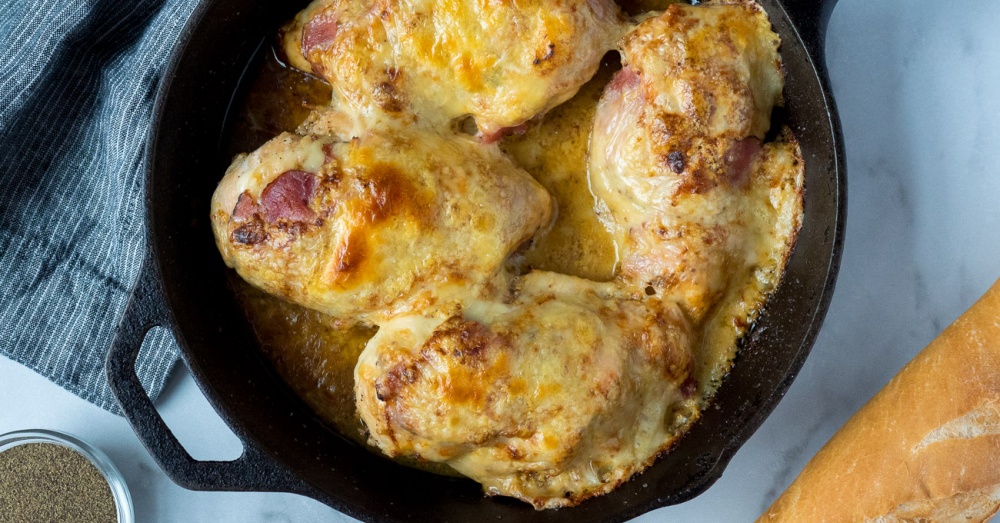 A delicious 20 minute version for your busiest weeknights.

Giada De Laurentis specializes in Italian food and Chicken Cordon Bleu is a dish with a French name that is most likely Swiss in origin. But no matter – Giada’s version of it doesn’t really need to be categorized. All you really need to know is that Giada has taken a somewhat fussy dish down to its brass tacks so that all of the focus is on the flavor and it only takes twenty minutes to prepare. Giada’s version is quicker than traditional Chicken Cordon Bleu and healthier too so it fits right into your weeknight dinner wheelhouse.

When I first saw this recipe, I was worried about the lack of breadcrumbs… Isn’t that telltale crunch what Chicken Cordon Bleu is all about?! But I promise you don’t miss them at all. Thanks to the broiling, you get a slight crust on the cheese and there’s so much flavor in the whole grain mustard and mascarpone mixture Giada uses that it doesn’t feel like anything is missing.

Instead of pounding out chicken and rolling it, breading it, and searing it, this easy method is just a matter of quickly pan searing some chicken, topping it with a few goodies, and popping it in the oven until it’s melty and delicious. There’s still that chicken/ham/Swiss combo that you expect from Chicken Cordon Bleu but it’ll have you in an out of the kitchen in less than a half hour.