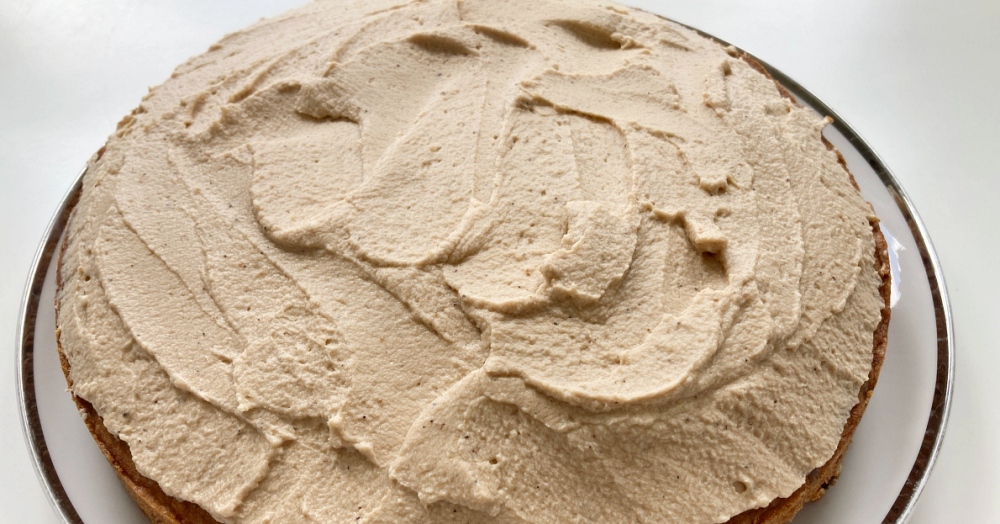 When it comes to cake, we’ve tried just about every type that’s out there. But, this unusual cake relies on a magic ingredient -Early Grey tea- to make it taste out of this world. The addition of mini chocolate chips in the batter also adds a richness that melds perfectly with the subtle citrus and tea flavors in the cake.

That yummy tea element is not only found in the cake, but also in the frosting. To achieve this you’ll need to make a batch of extra strong Earl Grey whipping cream. Combine the loose tea with the cream in a saucepan and bring to a bubble, but don’t let it boil too much. Then allow it to sit covered for 30 minutes to get every last bit of flavor from the tea.

I like to use decaffeinated tea for this recipe as it means there’s no restrictions on when this sumptuous cake can be enjoyed. If you have any of the “intense” or “double” Earl Grey teas then that’s even better. Once the cream tea has chilled you’ll use part of it in the batter and the rest will go into the frosting.

The batter also has some lemon zest and just a little bit of orange extract to boost the citrus flavor. Although bergamot has a unique flavor that has a slightly floral element, it’s actually a small, bumpy citrus fruit that gives this famous tea its character.

The frosting is a decadent mixture of the cream tea, some powdered sugar, and mascarpone cream. Because of the heating in the first step and the addition of the other ingredients, the cream won’t whip up like regular whipping cream, but it should form soft peaks.

The result is a warm and creamy flavor that makes this cake something truly special. It’s great on it own, but as you might expect- it’s also very nice with a cup of hot tea, too!

For the tea and frosting: