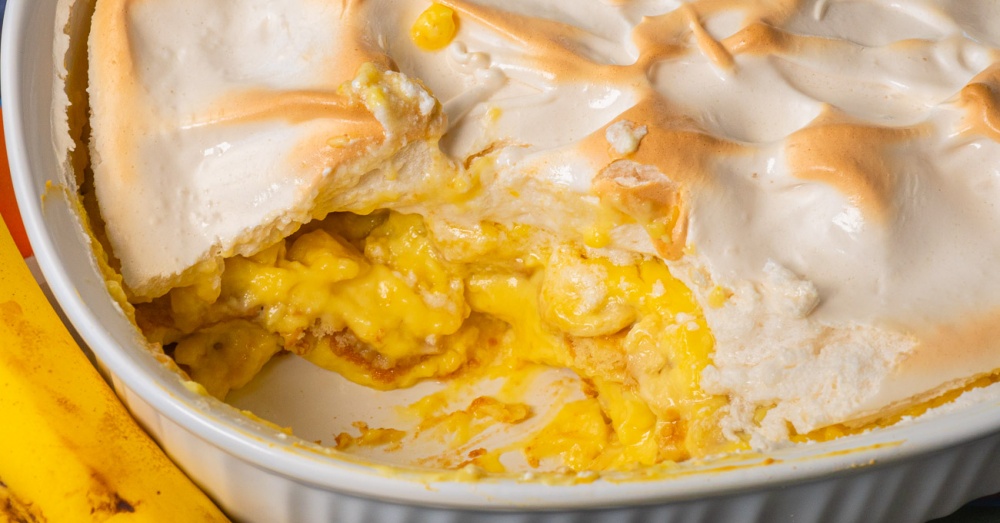 Banana pudding just as it’s meant to be.

Now, if you’re also used to my mom’s style of banana pudding, some things about this one might give you pause. First of all, you can serve it warm or cold. Before having it this way, I was so used to the cool and creamy bite of the chilled variety that I couldn’t even imagine why you would want a warm banana pudding. But let me tell you – warm banana pudding is HEAVENLY. It makes for a softer Nilla wafer and it intensifies the banana flavor and since here it’s true, real banana flavor, that’s very good news.

The second thing that might strike you as odd is meringue. Not that meringue is odd, it just wasn’t something I was accustomed to in this application. It makes sense though, as the pudding uses four egg yolks and you’ll have four egg whites leftover. Meringue is the perfect solution! And now I’ll tell you something else – meringue on banana pudding is HEAVENLY. It’s delicately sweet and while it’s a very different experience than a cool and creamy whipped cream, it gives you that airy contrast to the heavier pudding below. It’s good, real good.

This banana pudding is the one that made me realize why people rant and rave about banana pudding. There’s nothing else like the combination of real banana flavor and a homemade pudding with soft vanilla cookies and an airy meringue. It’s just as its meant to be, and I might have told you twice already, but I’ll tell you one more time – it’s HEAVENLY.

For the Meringue Topping: