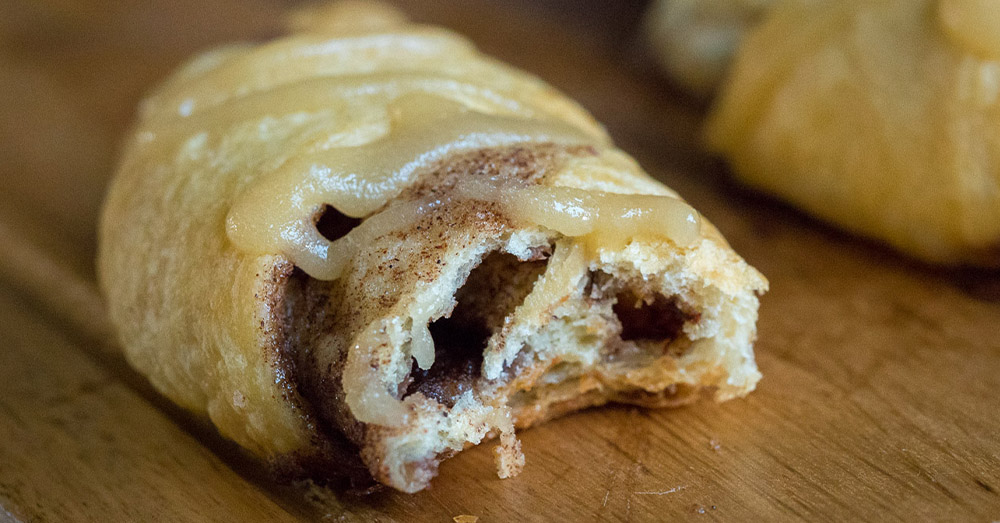 Make them for breakfast OR dessert. Or both! They only take 15 minutes.

My mom has made crescent rolls for the Thanksgiving and Christmas dinner meals as far back as I can remember and for just as long those simple doughy, buttery rolls are one of the things I looked forward to most about the feast. But she never made them quite like this. This simple genius trick takes the same can of crescent roll dough and transforms it into something akin to a sweet and indulgent cinnamon roll. They walk the fine line between breakfast and dessert but they’re easy enough to make that you could go ahead and have them for both.

You’re not going to believe how easy these are. You take that tube of dough and separate out the triangles and then mix up some butter, sugar, and cinnamon and spread it generously over each triangle.

Then you roll them up, and bake. That took what, five minutes?

Five minutes of hands on work and ten minutes in the oven is a pretty good deal for something as tasty as these. There’s also a quick buttery, sugary glaze that’s no trouble at all, and besides… what’s a cinnamon roll without the glaze?

These are as pillowy and sweet as a traditional cinnamon roll, but with that doughy chew that makes crescent rolls so delicious. It’s a mashup that’s meant to be!

Recipe adapted from The Hungry Housewife.