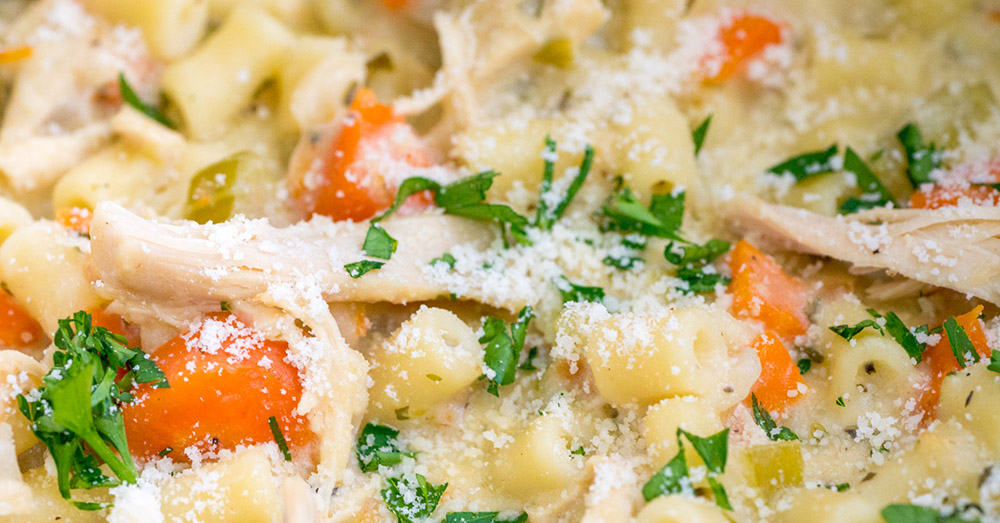 Regardless of whether it’s really a soup at all…

Inspired by the ever-classic chicken noodle soup, we’d probably call this version of it a noodle chicken soup, and, while soup might seem like a bit of a stretch, we can assure you this at least started out as a soup…and then the noodles absorbed all the creamy, amazing goodness and we just decided to keep it that way and keep calling it a soup. But you can call it whatever you want!

This parmesan noodle chicken soup is about as comforting and cozy-inducing as it could possibly get. If this doesn’t make you want to curl up and hibernate next to a fireplace, we don’t know what will. It’s got a lot of the same staples we would expect from a chicken noodle soup – noodles, chicken, carrots, onion, celery and chicken stock – but it’s got plenty that differentiates it from the traditional version and really kicks things up a notch….

First things first, this is a roux-based soup, which is part of why it’s so über creamy. That, and the fact that we added not one, but two cups of parmesan cheese make this extra thick and delicious. Using tubetti pasta was another change we made from the more expected version; we love these little tubes so much, as they get coated in the cheesy, soup-y mixture and it means more creaminess per bite. We can’t argue with that. A little white wine adds more flavor as you cook your veggies, a pinch of red pepper flakes offer a bit of spice…this soup, in one fell swoop, has earned its spot in our recipe arsenal and we’re pretty sure we’ll be making it throughout the cold months!