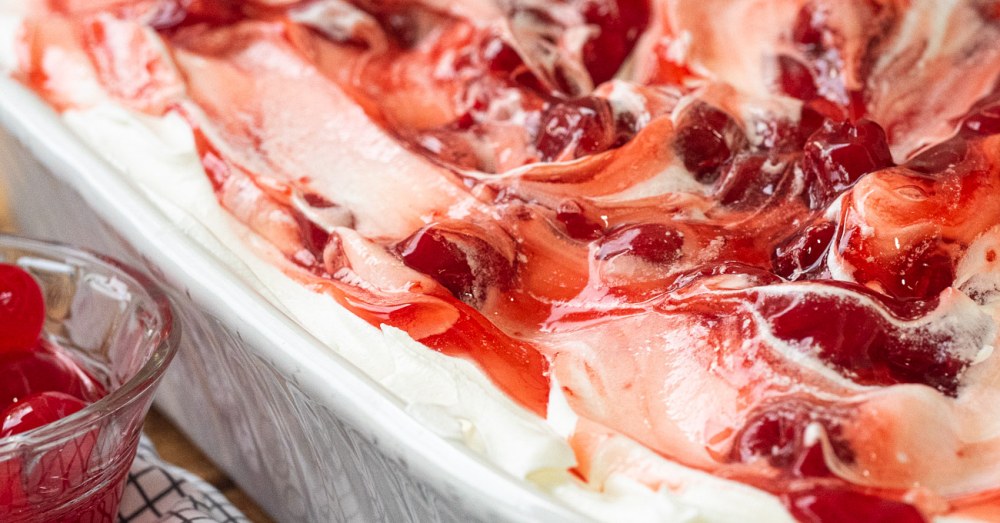 Sweet, simple, and charming- this dessert has it all.

A good cake is the best way to end a meal, and it’s even better if it’s a poke cake. This type of cake gets its super-moist texture from the addition of a vanilla pudding mix (made with milk) that’s poured on top of the cake and into the holes poked by a chopstick or skewer. You could also use a large boba straw instead which would allow more of the pudding to seep into the cake.

This particular recipe starts with classic yellow box cake, vanilla instant pudding mix, cherry pie filling, and Cool Whip. The name recalls the famous Revlon lipstick shade which has been in production since 1953. Unlike the raspberry-color lipstick, this cake does actually remind one of cherries in the snow thanks to a layer of Cool Whip covered in cherry pie filling on top.

To start this recipe you’ll prepare a yellow box cake to the instructions on the box. Once the cake has cooled off a bit, you poke you holes all through the cake and then pour the pudding mixture -2 cups milk and 1 box pudding mix- over the top.

To let the rich pudding really soak into the cake, you’ll need to refrigerate the cake for 2 hours. To mix it up a bit you could use a white chocolate pudding mix instead of vanilla and you can use either vanilla or white cake mix.

After the cake is cooled and the pudding set, then it’s time to create the wonderful topping. First spread a tub of thawed frozen whipped topping over the cake. Then gently spoon on the cherry pie filling. Very gently disperse the cherries on top so that some of the whipped topping shows through.

Cut the cake into 12 equal squares and then you’re ready to serve this classic cake. The flavors of cherry and vanilla go perfectly together, which is one reason this cake is always a hit.

We love the festive name of the cake and the way it looks on the table at the winter holidays. But, this cake doesn’t have the usual fall/winter flavors of cinnamon, spice, cranberry, or peppermint- which means you can serve this yummy dessert all year long!

Recipe adapted from The Country Cook.