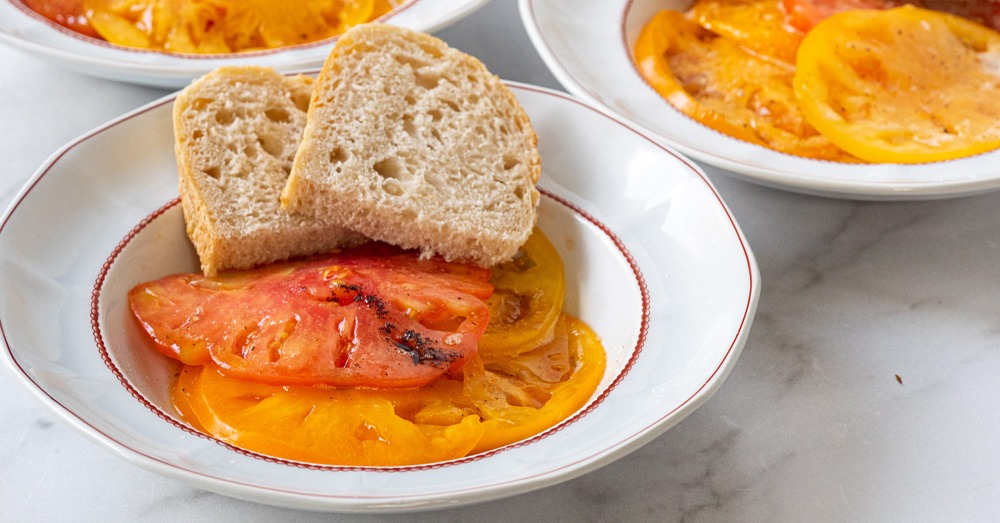 Tomatoes in season are one of life’s special pleasures. But, when we first heard about brown butter tomatoes we were skeptical that they could be center of attention at the table. Don’t let the simplicity of this recipe fool you: it’s every bit the star of the show. For a quick meal you’d only need a side (or two if you have really hungry people at the table) to make this a home run meal.

Cut the tomatoes into 1/3″ slices. Once these are sliced then you’ll want to divide the tomatoes among 4 plates equally. Lay the slices out like dominoes. For this we use pasta bowls and you might want to choose dishes with a bit of a lip as well to collect all the yummy butter that goes on top.

Ready 4 to 8 slices of crusty bread or baguette slices for dipping. Now comes the fun part. You melt 6 tablespoons of butter in a pan until it turns a caramel shade, stirring every 30 seconds.

Then pour the brown butter over the tomatoes. Sprinkle with salt and pepper and serve immediately, with the bread to soak up the extra butter and the juices.

The tomatoes don’t get cooked, but their flavor is opened up by the hot butter and the salt and pepper. It sounds too plain to be special, but trust that the effect is exceptionally delicious.

There’s something about this very simple formula that is so satisfying. For anyone who grew up in the South there’s no denying the love affair that Southerners have with tomatoes, but this takes things to a whole new level.

If you want to try something that proves just how good simple meals can be then try brown butter tomatoes. It may just become your new favorite “lazy” meal.

Recipe adapted from The Forest Feast.