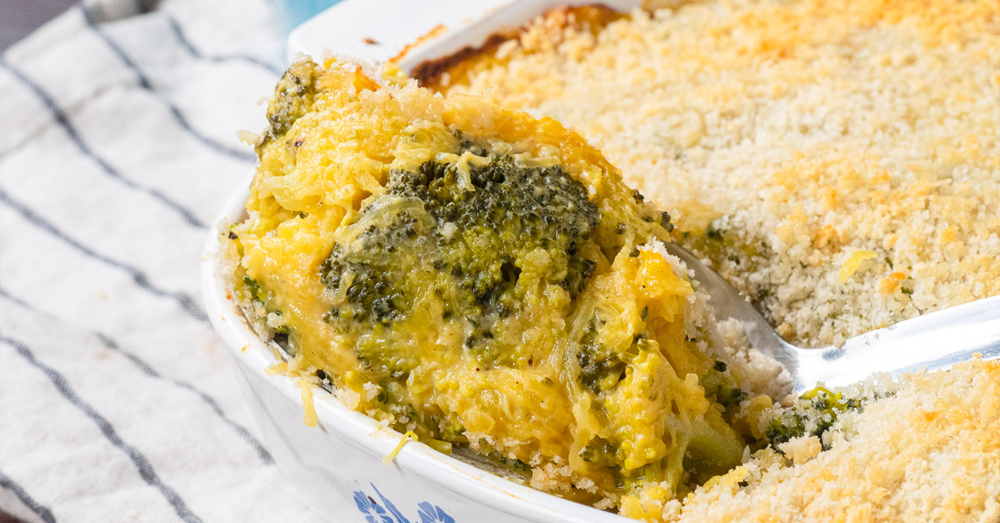 Before I say anything else, I want to say that never once have I had spaghetti squash where I found it to be an acceptable substitute for actual spaghetti. But don’t fret, that’s not what we have here. In this casserole, spaghetti squash is just allowed to be itself – not a stand in for something else – and it mingles with a classic broccoli cheddar combination for a bake that is both veggie based and so scrumptious that it’s honestly a little hard to believe. But the good thing is tasting is believing!

The baking time on this is a little long, but that’s because you have to bake the squash first to get it tender, and then bake everything once more once it’s all been mixed together. You can work on the broccoli and the cheddar sauce while the squash is in the oven though, so it’s not all that time consuming.

In this dish, spaghetti squash isn’t pretending to be spaghetti but we still make great use of the fact that it naturally separates into strands. It creates a lot of surface area to mix with a delicious sauce and in this case it’s a rich cheddar one. The flavor here tastes a lot like broccoli cheddar soup to me… but in casserole form, with crispy breadcrumbs! And there’s nothing bad about that.