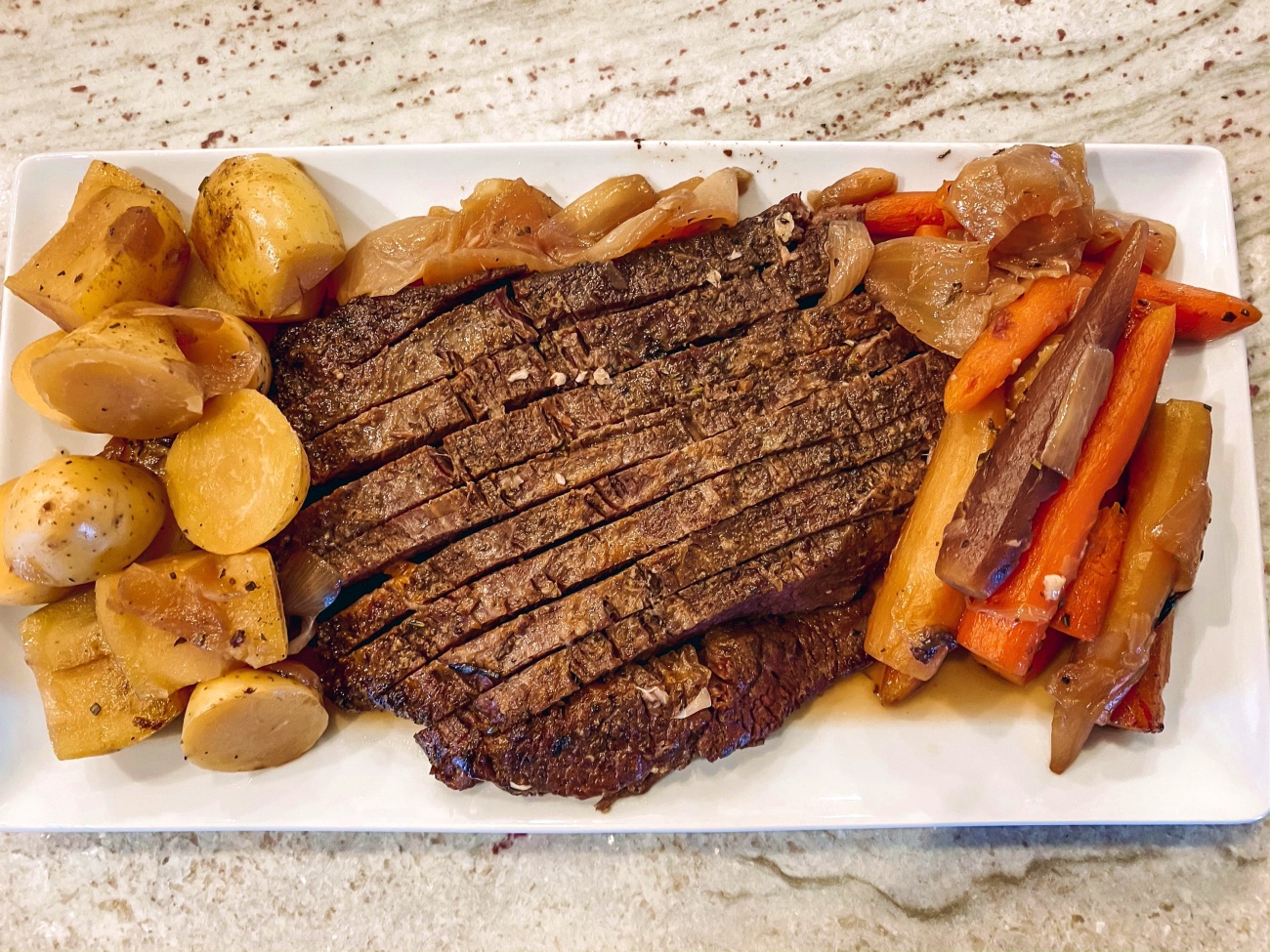 The perfect pot roast every time.

While there are quite a few different cuts that make a great pot roast, I like to use a nice brisket for a tender yet fairly lean result. Here, I show you how to make a pot roast with great flavor and reliable results – my recipe is packed with garlic, onion, carrots, fresh herbs and a rich gravy and it turns out fall-apart beef every time.

The brisket I’m using here is about two and a half pounds, but the process is the same for larger or smaller cuts of meat. While I’ve used onion, carrot, and potatoes here, you can definitely play around with the amount and type of veggies you’re using. I love onion so I used two of them; I also love garlic which is why I used a whole head. By the end of the dish they are so soft and tender and delicious. But if you prefer more carrots or even another root veggie like a turnip, go for it.

You’re going to start by seasoning your beef with salt and pepper and searing it well on both sides. After that’s done, you’ll remove it from the pot and set it aside while you brown the veggies.

It helps to use the largest Dutch Oven you own. This way you have maximum surface area for the browning process. More contact with the pot will lead to more browning, and more flavor in the long run. Once the veggies have some nice color, you’ll deglaze the pot with red wine. It’s going to get very bubbly and steamy but stick with it. Scrape as much of that brown stuff off the bottom as you can, that’s called the fond and it’s all great flavor.

Once the beef broth and red wine are bubbling, you can add the meat back to the pot and then the oven does the rest of the work for you. Though the meat will be falling apart pretty much on its own once it’s done, you want to cut against the grain.

I like to serve the juice in a gravy boat so everyone can decide how much to use on their own plate. You can leave it as is or you can thicken it up into a gravy. On that step, when you whisk your flour into the melted butter, make sure to give it a minute to cook. It’s all about cooking out that raw flour flavor, and allowing all the flour to soak up some butter. Don’t skip this part as if all the flour isn’t hydrated by fat, it won’t properly thicken the gravy later.

If you know you want a very thick gravy, either add a cup and half of broth, or up the butter/flour amounts to three tablespoons each. The gravy gets thicker once it comes to a boil and cooks a little. It’ll also thicken up on the table once it’s poured and sitting there.

One more thing, this dish leads to very soft carrots. If you’d like them to be firmer and not have that texture, then add them to the dish when you add the potatoes. Enjoy!