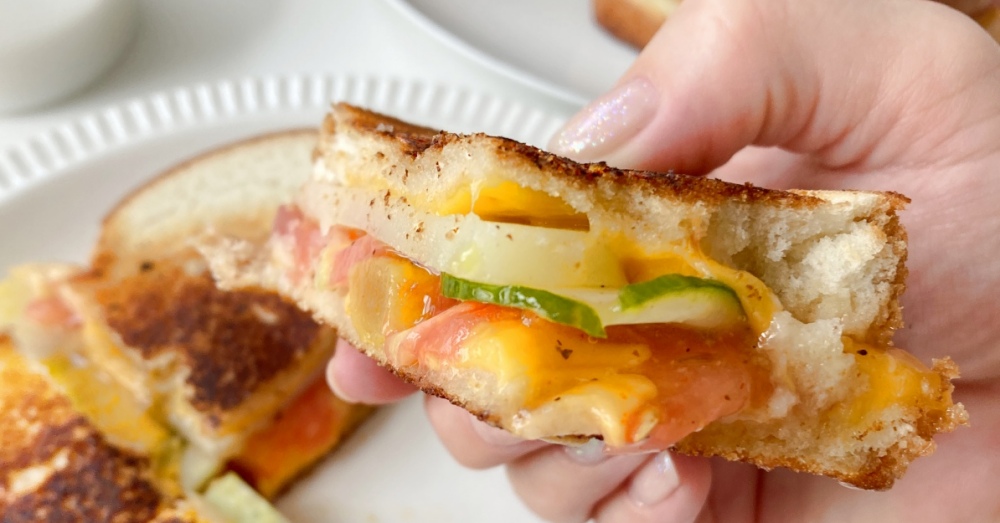 Never a boring bite with this sammy.

If there’s a hot sandwich involved, I’m probably on board! But, often times I rely on the old standby of a grilled cheese which can get a bit same-y. So when I saw this recipe for a Bombay sandwiches, I knew I had to try it out. And I’m so glad I did.

Bombay is the pre-1995 name for Mumbai, one of the most populous cities in India. The majority religion of Mumbai is Hinduism, meaning vegetarian dishes are the norm in restaurants there. This definitely applies to sandwiches and this local variation on a grilled cheese adds tons of flavor as well as some veggies into the mix for a really tasty and hearty lunch or dinner.

To start making this sandwich you’ll peel and thinly slice a red potato then boil it until tender. This gives the sandwich some bite, but also adds a comforting flavor. Instead of having chips or fries on the side, you’ve got your potato already in the sandwich.

The other toppings include cucumber and tomato, as well as chutney. I used a mango chutney here, which adds even more substance to the sammy since there are big chunks of mango in each sandwich. But, you can use any kind of chutney you like.

Fry these sandwiches in a big skillet and place another skillet on top to press them down as they cook. This ensures that they get nice and crisp on the outside.

Then the final touch is the dipping sauce. It’s no lie to say that this sauce really makes this sandwich! It’s a mixture of yogurt, lime zest, lime juice, and garam masala. This last ingredient is a spice blend that’s common to Indian cooking and is often used in dishes like butter chicken, tikka masala, and biryani.

The translation of garam masala means “hot spice” but this blend isn’t typically spicy. Instead the heat here refers to the warming blend of spices such as cardamom, cinnamon, and cumin. When combined with the rich yogurt and perky lime zest the product is extremely tasty.

With all the wonderful fillings, the chutney and cheddar, and the spiced yogurt sauce this is one sandwich you don’t want to miss.

For the yogurt sauce:

For the yogurt sauce:

Recipe adapted from All Ways Delicious.