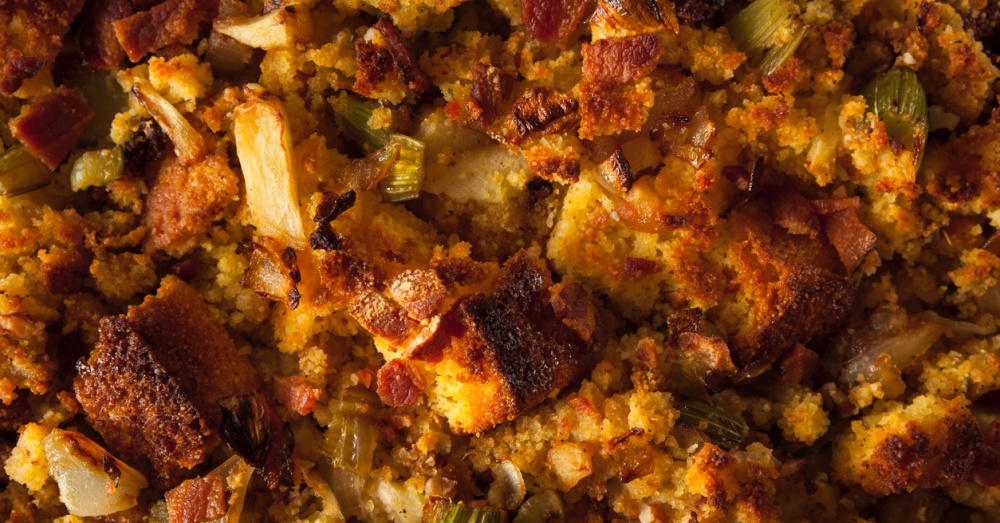 Or “dressing,” if you want to get technical….

While we love everything about Thanksgiving, it’s the stuffing that’s generally our favorite part – if we were forced to choose, that is. We love most stuffings, but require that they be super moist and flavorful…none of that dry stuff for us. Secondly, while we have had great stuffings that were made with French bread, we prefer a slightly sweet and salty combo that comes mainly from using cornbread instead of regular bread, and bacon instead of sausage, which strikes just the right balance of salty and sweet.

You want to start with really dry cornbread cubes. That’s important. Whether you leave the cornbread out for a couple days, or dry it out, low and slow, in the oven, the dryness of the bread allows for it to absorb the chicken broth without getting overly mushy. Along with swapping in cornbread for regular bread, we also swapped in bacon instead of using the more traditional sausage – we love it this way! We kept the softened celery, onions and garlic, which add lots of flavor, and we added a splash of white wine to deglaze the pan and add a bit more depth, plus, plenty of dried herbs to kick things up a notch.

This stuffing is so tasty, we’ve been known to go back for seconds and only fill our plate up with this stuff. People may laugh, but that’s only because they don’t know something yummy when it’s right in front of them! If you’re looking to switch things up a bit, or haven’t found the right stuffing for you yet, give this one a shot and see if it doesn’t win you over after that first bite. Once we start cooking everything on the stove and it all starts smelling amazing, we’re super pumped about it and you will be too!