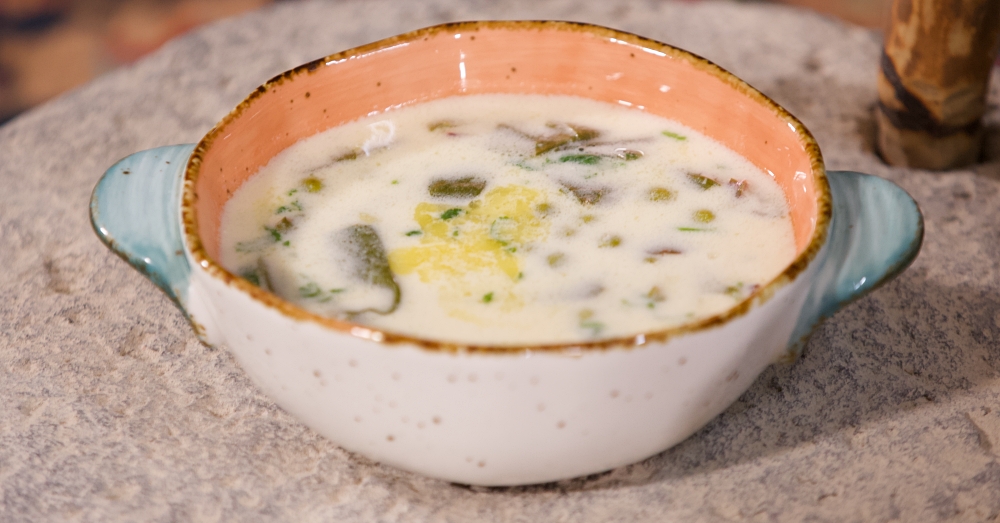 In traditional Armenian cooking there is a soup called “sour milk soup”. These days it’s often made with yogurt, but is still considered a healing food for those in need of some nourishment. It can be made with mint, but can also be made with grape leaves, beet greens, and/or spinach. This recipe, from the area of Martuni, calls for both greens and cilantro for a nice, fresh taste.

The addition is peas to this particular recipe makes this an even more nutritious soup that’s perfect for cooler weather. The base of this soup is Greek yogurt, egg, and a little bit of flour. For a richer soup use the whole milk yogurt as it will impart a creamier texture and flavor to the soup.

Blend the peas into the yogurt and egg yolks and stir well. Next add in water and set to simmer on the stove for 30-40 minutes.

At the end add the greens, the cilantro, and some butter and salt for flavor. Then remove from the heat and cover, allowing the flavors to meld together.

Serve this soup served alongside some bread for a soothing meal that also happens to be vegetarian.