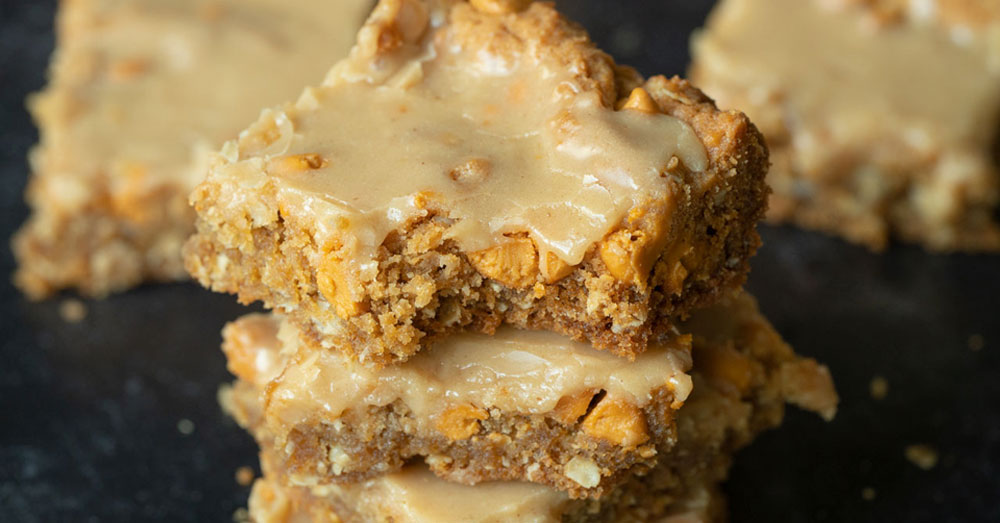 There was a time when we all knew Trisha Yearwood as a country singer, but now that she’s on the twelfth season of her own cooking show, it’s pretty clear that she’s a standout star in the kitchen too. We’ve made a few of her recipes here at 12 Tomatoes now (her Baked Bean Casserole and her Charleston Cheese Dip to name a couple) and they’ve never failed to be totally delicious. Her Butterscotch Bars are no different – a soft and sweet bar studded with nutty oats and plenty of peanut butter and butterscotch flavor, they’re a triumph of a dessert bar.

There’s something so nostalgic about butterscotch, isn’t there? Maybe it’s because grandmas always tend to have those hard butterscotch candies, but that flavor makes these bars taste just so very classic. There’s nothing new-fangled about them, just good old-fashioned peanut butter and butterscotch flavor. And they’re easy to make too!

The batter isn’t that much different than whipping up some cookie dough or brownies – there’s no separate crust or filling to worry about, just a single batter topped with butterscotch chips and a peanut butter glaze. You cream together butter and sugar, and mix in some eggs, peanut butter, and vanilla before adding flour and oatmeal to the mix. That’s it! You spread that out in a pan, top it with some butterscotch, and stir up a quick glaze while the bars bake. The end result is a buttery bar with a little chew and a lot to love.