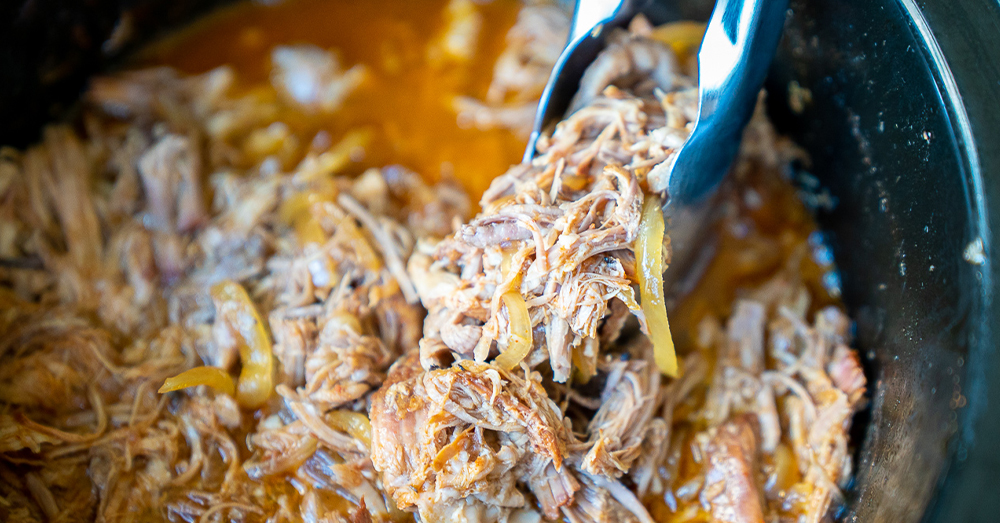 The secret to tender, flavorful pulled pork. Every time.

Pulled Pork is one of the most crowd-pleasing dinners out there. Slap it on a bun or on a baked sweet potato (one of my family’s favorites) and dinner is done, and it’s a darn good dinner. I love a recipe where the slow cooker does all of the work for you and that’s what we’ve got for you here, but the magic isn’t just in the cooking method, it’s also in the secret ingredient — a can of Dr Pepper. That little can of soda somehow makes for some of the most flavorful, tender pulled pork out there, so give this a try!

The Dr Pepper lends a ton of flavor here, but that’s not the only flavor. First you’re going to rub your pork roast with a nice little mixture of salt, pepper, paprika, garlic powder, and onion powder. You could use your favorite spice rub, but that combo is a classic and it works in most any meat-slow cooking application.

That rubbed roast heads into the slow cooker atop a bed of sliced onions and then barbecue sauce and Dr Pepper join the party.

Eight hours on low or four hours on high should give you tender, falling apart pork if your roast is about four pounds. The nice thing about slow cooking is you can let it hang out a little longer and you’re not going to hurt anything.

Shred that meat apart with a couple of forks and serve it up however you see fit. While you can make pulled pork with just a basic barbecue sauce and it’s totally respectable, the Dr Pepper here adds another dimension. It’s a little less cloying, has a little more of an acidic bite, and it’s tender as can be.