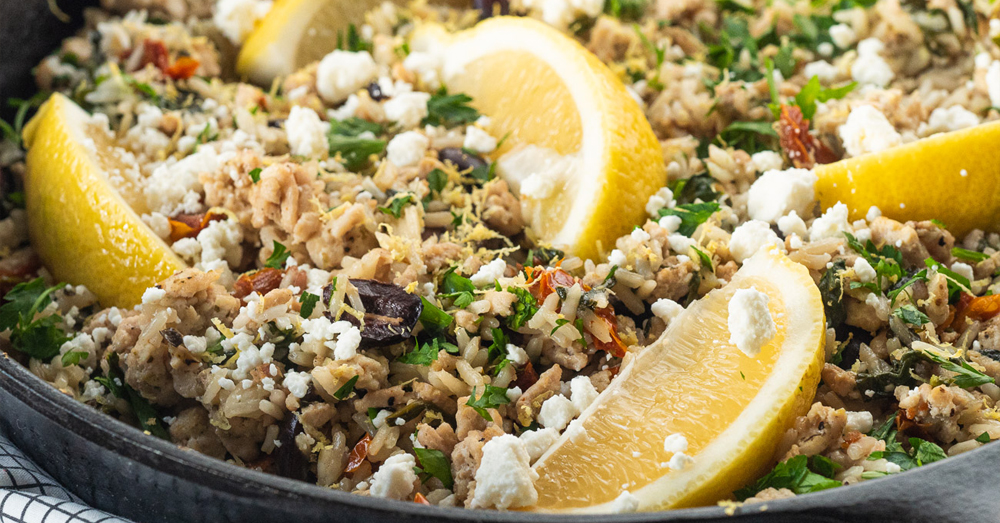 So much Mediterranean flavor out of one pan!

There are not a lot of dishes out there that can be the savior of your busy weeknights quite like a skillet dinner. An entire meal in a single pan is hard to argue with and when it’s as delicious and nutritious as this Greek Turkey and Rice Skillet, well, it’s nearly impossible. It’s chock full of good stuff – rice, juicy ground turkey, sun dried tomatoes, salty kalamata olives and feta – and it will take you just around a half an hour to get on the table. That means you get a scrumptious meal in short order, which is good news whether you’re super busy or not.

What I love about this skillet meal is that it truly is a one-pan dish. You don’t have to pre-cook the rice or simmer it in another pot – it cooks right in with everything else in the dish. You start by browning the ground turkey with some oregano and garlic, and then you add in all the stuff that makes this so delicious – kalamata olives, sun dried tomatoes, spinach, and the rice.

Pour in some chicken broth, bring it to a simmer, cover it, and let it do its thing for fifteen minutes. After it rests, you’ll find you have fluffy, tender rice and a very flavorful dish.

Some lemon zest and parsley really set this off, but it wouldn’t be complete without some crumbled feta. It’s just the right salty accompaniment to echo the sliced olives. This dish is seriously such a yummy combination that it’s hard to believe it’s so quick and easy to make, but in this case, tasting is believing!