Sows Spend Their Lives In Gestation Crates Before Going To Slaughter, But Do They Have To?

Imagine being confined to a steel pen without enough room to even turn around, being forced to stand and lay on a slatted floor, and living a couple feet above your own waste.

“Throughout nearly the entirety of their 112-115 day pregnancies, most breeding sows in the United States are confined in gestation crates (also known as sow stalls)—individual metal enclosures so restrictive that the pigs cannot turn around,” details the HSUS report, “Welfare Issues with Gestation Crates for Pregnant Sows. “Crated sows suffer a number of significant welfare problems, including elevated risk of urinary tract infections, weakened bones, overgrown hooves, lameness, behavioral restriction, and stereotypies.”

Every year, millions of breeding sows are locked in gestation crates at 7 months of age, impregnated, and forced to live out their lives standing in their crates waiting to give birth, the Humane League reports.

Not only are they unable to turn around or move, the animals suffer from respiratory illnesses caused by living a few feet above their feces, World Animal Protection reports. With no stimulation or ability to play, these incredibly clever animals develop severe neurotic issues.

“The chronic stress of confinement reduces their immunity, predisposing mother pigs to disease,” writes Cameron Harsh for WAP. “This is addressed by the continuous administration of antibiotics, contributing to the spread of resistant bacteria and increasing resistant infections in humans.”

Once a sow gives birth, the pig is moved to an equally restrictive crate to nurse, but is unable to turn around to see her piglets for the two weeks or so before they are taken away. This cycle continues over and over, year after year, until the sow is unable to breed any longer, and sent to be slaughtered.

“These animals are raised like they’re parked cars, side by side, cage next to cage in a giant warehouse,” said Josh Balk, vice president of farm animal protection for the HSUS. “If this practice was done to dogs or cats, it would be illegal. But it became standard in the pork industry.”

More and more farmers and states have been moving away from gestation crate practices in recent years. At least 12 U.S. states have now enacted legislative bans that are already in full effect, or being phased out over the coming years, the ASPCA reports.

Large livestock farms in the U.S. are also are making the same humane policies their own. According to the HSUS report, Smithfield Foods, the world’s and United States’ largest pig producer, and Maple Leaf, Canada’s largest pig producer, have committed to phasing out the use of gestation crates.

“Our own research has demonstrated that group pens are as good as individual gestation stalls in caring for pregnant sows,” said Smithfield Foods CEO Larry Pope.

No animal deserves to spend its life in a cramped metal container. Click below and help us end the use of gestation crates in the U.S.!

Help End The Use of Gestation Crates! 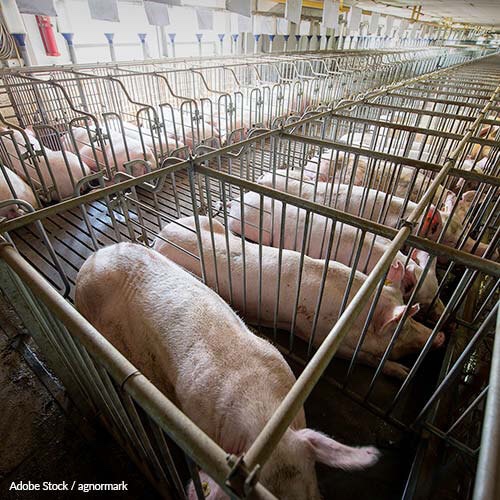 Every year, millions of breeding sows are locked in gestation crates at 7 months of age, impregnated, and forced to live out their lives standing in their crates waiting to give birth.

This cycle continues over and over, year after year, until the sow is no longer able to reproduce and sent to be slaughtered.

Help us ban inhumane gestation crates in the U.S.!