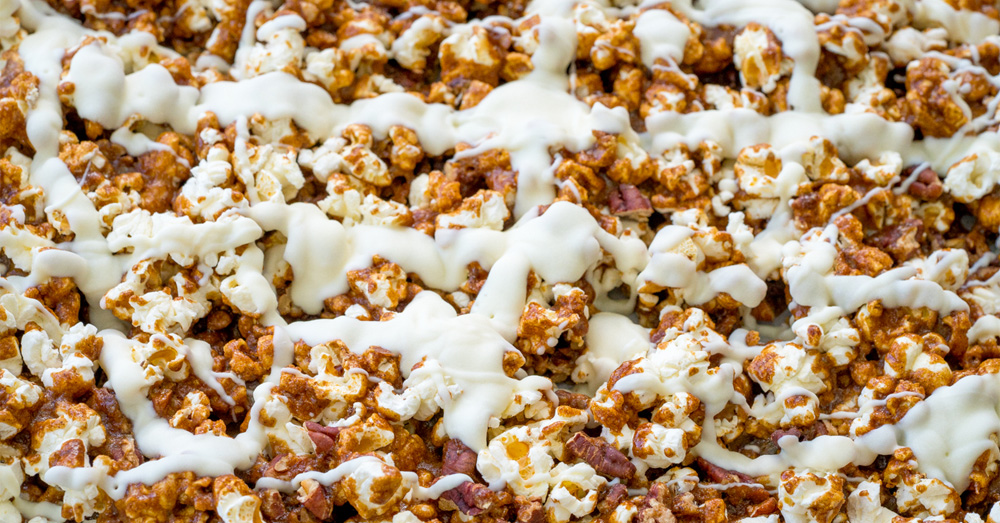 The glaze is the best part….

Picture this: Saturday morning, you wake up to a tray of freshly baked cinnamon rolls that are perfectly glazed and ooey gooey and the best way to kick off your weekend. Isn’t that just the best? While we’d love a warm cinnamon roll at just about any time of day, we’ve got a twist on the classic…and it’s wayyy easier to make than traditional cinnamon rolls.

This cinnamon roll caramel corn is ridiculously good. It’s got the ooey gooey cinnamon component – that dries into deliciously crackly bites of popcorn – and is glazed with a tasty almond bark drizzle that ties the whole thing together. Once this stuff sets you can break it up into chunks of cinnamon roll goodness that are perfect for sharing at parties. People might not know that they’ve been missing cinnamon roll caramel corn in their lives, but they’ll never forget it once they take that first bite!

You’re going to whip up a cinnamon mixture that gets tossed with the popcorn, then that’s going to bake to perfection; its time in the oven is just enough for the cinnamon syrup to caramelize and develop more flavor – yum. Then you melt your almond bark or white melting chocolate and drizzle it over the popcorn, just as you would glaze your toasty cinnamon rolls. Don’t just take our word for it, make this caramel corn for yourself and see how good it is!

Recipe adapted from Creations By Kara