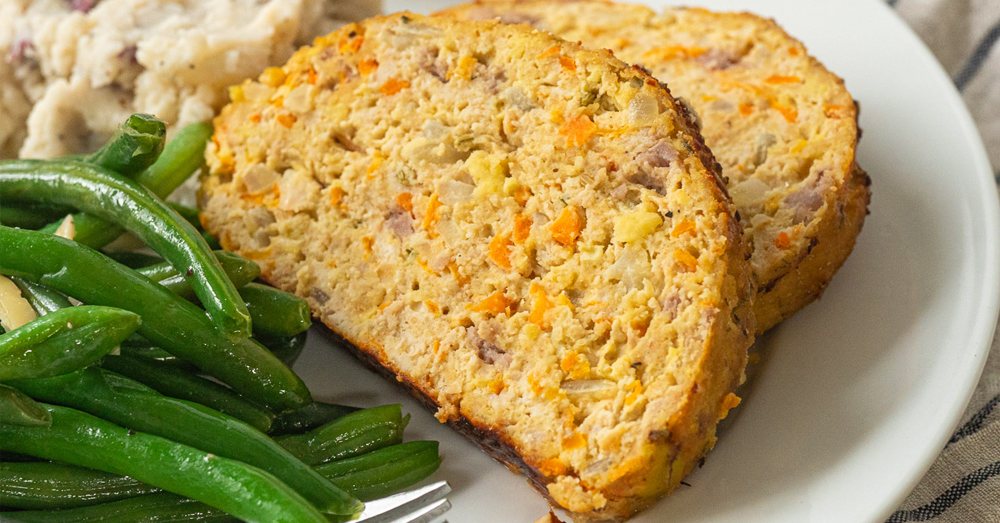 My very favorite meatloaf, turkey or not!

I discovered this recipe on a food blog over a decade ago and I’ve been making it regularly ever since. It’s that good. The blogger says it’s a tribute to the greatest meatloaf she ever had but her tribute is truly the greatest turkey meatloaf I’ve ever had. While most turkey meatloaves are dry and kind of boring, this one is incredibly moist and so flavorful thanks to a medley of grannysmith apple, carrot, and Dijon mustard. I can tell you all about it and still not sing its praises highly enough – just trust me that it’s a must try.

What sets this apart from other turkey meatloaves is the combination of flavors that’s mixed into it. Rather than relying just on meat, eggs, breadcrumbs, etc, you cook down some grated carrots, green apples, onion, and fennel seed to add to the mixture. The tartness of the apple is a genius complement to the turkey – it brightens it up considerably.

But that’s not all that’s genius here… The recipe also includes a bit of pork sausage in the mixture and that adds much needed fat and flavor to the turkey. So I guess you can’t really say this is just a turkey meatloaf, but the ratio of turkey to pork is still high enough that it’s a lean main dish.

The original recipe calls for this to be baked in a loaf pan, but I’ve found that it’s actually better to go with a free form baking method here – it allows some of the juiciness to evaporate so the liquid doesn’t gather around the meat, which it tends to do in a loaf pan.

There’s one more important component that makes this the greatest turkey meatloaf of all time, and that’s the glaze. A far cry from the ketchup topping you might get with a classic meatloaf, this has a mixture of Dijon mustard, honey, thyme, and Parmesan cheese. It. Is. Delicious. (And pro tip: it’s great on pork tenderloin or pork chops. Or chicken breasts. Or anything, really.)

It’s a meatloaf that’s unlike any other I’ve ever had and it’s been a family favorite of ours for a good long while now. I hope it becomes one of yours, too!