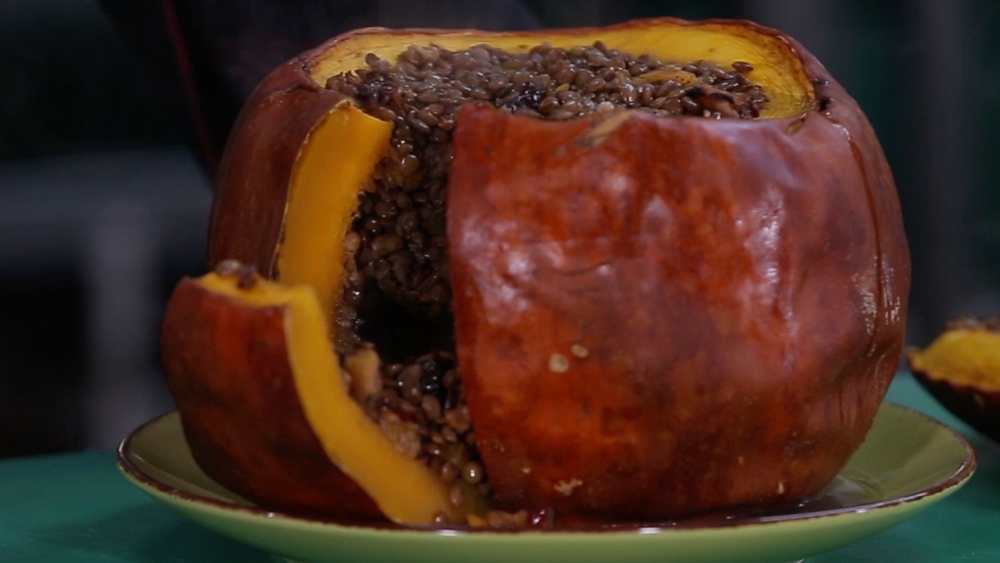 This is a great vegetarian option.

Pumpkins can be a really show stopping main course when stuffed. For a fall table theres nothing quite like it. This Armenian version is filled with a combination of lentils, fruits, nuts, and spices and then baked until perfectly cooked. This is a good recipe for those who want a hearty, meat-free alternative at the fall table.

To begin making this recipe you’ll need to cut out the top of a 10-pound pumpkin. Do this as neatly as possible because it will be your “lid” later on in the cooking process. Just like carving a jack-o-lantern, make sure to cut it far enough down that a good-sized hole is made, allowing you to get your hand and a spoon inside to scoop out the pulp and the seeds.

Once this is done then you can start on the filling which is made from lentils. Boil the lentils until they’re almost done, then remove them from heat. In another pan combine dried peaches, apricots, and prunes with chopped walnuts and butter. Sauté them for a minute before adding a special ingredient: brandy. In many parts of the world a bit of brandy is added to many dishes to give a certain something extra to sauces, meats, and other recipes, too.

For this recipe you’ll need to flambé the brandy to remove the alcohol and then let the flame burn itself out. As an alternative you could add a bit of rum flavoring to the fruit instead and bypass the whole fire thing altogether.

To the fruit you add chili pepper, honey, allspice, and dill to create a mixture that will flavor both the lentils and the pumpkin. Add the fruit to the lentils and then fill the pumpkin with this mix. Pop the lid back on and then bake this for 45 minutes. What you end up with is a richly-spiced, lentil-stuffed pumpkin that’s perfect for a fall or winter table- particularly if you have people with varied dietary requirements coming to dinner as it’s vegetarian and gluten-free. You can replace the butter with coconut oil and use maple syrup instead of honey to make this recipe vegan if you wanted as well.

Plus, there’s nothing like serving a whole, roasted pumpkin filled with aromatic lentils at the table. Your guests will be impressed!